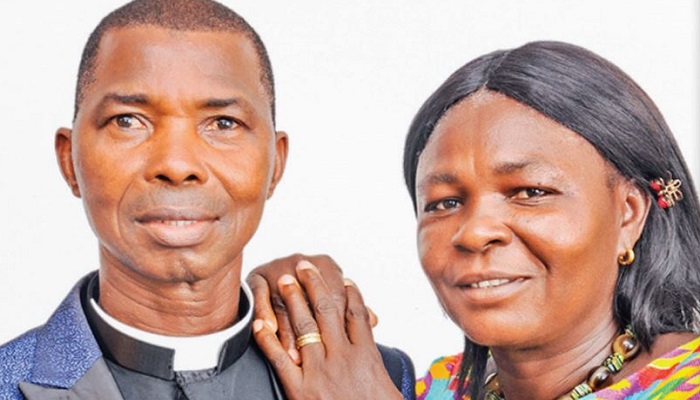 Lawrence Kwadwo Duodu was born on April 24, 1954 at Boadua in the Akwatia District of the Eastern Region, to Elder Jacob Kwabena Lartey and Deaconess Akosua Manko, popularly known as Maa Manko; both of blessed memory. He is the fourth born of his parents.

He began his education at Denkyira Fosu Roman Catholic Primary School from 1960 to 1961. He was sent to stay with his grandmother at Ayensuano Amako to continue his Elementary Education from 1962 to 1964. His grandmother left Ayensuano for Adubensu near Suhum where he continued his education at Adubensu Presbyterian Primary to Middle School from 1965 to 1971. He passed the Middle School Leaving Certificate (MSLC) Examinations in 1971, after which he sat for and passed the Common Entrance Examination with distinction. Due to the early death of his parents, the poor living conditions of his grandmother and financial constraints, he           could not continue his education.

With God on his side, he was employed at the then Berekum Jaman District Council as Office Clerk in 1976. By dint of hard work, fear of God, humility, respect, loyalty and obedience, he continued gaining promotions from 1976 to 1978. Based on his zeal at work, seriousness, punctuality and time consciousness, the District Chief Executive (DCE) Mr. G. W. K. Fianu, made the District Council enrol him for further studies at Dormaa Ahenkro National Vocational Training Institute (NVTI) from 1979 to 1981. There, he studied Building and Construction. On completion, he was promoted to Senior Clerical Officer at the District Office.

Lawrence K. Duodu was born into The Church of Pentecost by virtue of the fact that both of his parents were members who later became Officers. When he completed elementary school, he went back to live with his elder brother, who was then Presiding Elder of The Church of Pentecost at Asma Camp in Dunkwa-On-Offin in the Upper Denkyira District.

In August 1972, The Church of Pentecost at Dunkwa-On-Offin District organized an August Convention at Asma Camp under the leadership of Apostle Edward Dankyi (now deceased) who was then Regional Apostle for the then Sefwi-Denkyira Area and at the same time serving as District Minister. On Friday, August 20, 1972, the then Elder D. Y. Asare who was the District Witness Movement Leader, now Apostle (rtd), preached the gospel that night. At that convention, Duodu accepted the Lord Jesus Christ as his Lord and personal Saviour and was baptized by immersion on August 24, 1972 by Apostle Edward Dankyi. Due to his workaholic zeal for the work of the Lord, he was ordained as an Deacon in 1975 by Apostle Edward Dankyi.

On March 23, 1980, Lawrence Kwadwo Duodu married Miss Hannah Akua Osei at Berekum in the Brong-Ahafo Region. Their wedding was officiated by Apostle Patrick Asiamah (the then Regional Apostle for Brong-Ahafo and now deceased) and Prophet S. K. Osei the then District Pastor for Berekum. Their marriage has been blessed with four (4) children; 2 males and 2 females, namely: Elder Patrick Kwasi Asiamah, James Kwabena Duodu, Keziah Nyamekye and Eunice Serwaa Duodu.

On Sunday, July 28, 2019, Pastor Lawrence Kwadwo and Mrs. Hannah Duodu will retire from the full-time ministry of The Church of Pentecost. To God be the Glory.