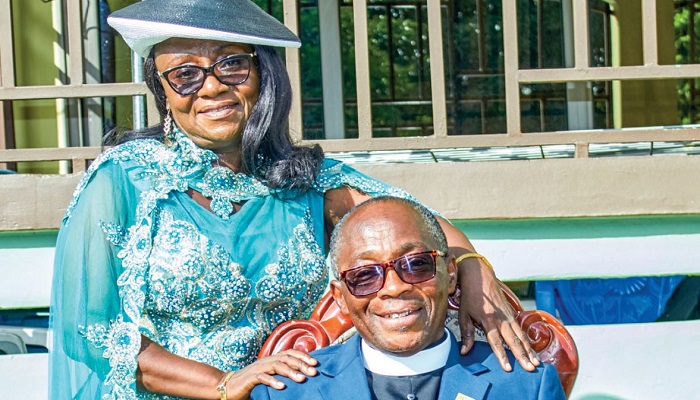 Mark Egyir Arthur was born in Kumasi on 3rd January, 1954 to Mr. Kwabena Asiedu and Madam Felicia Mensah, both of blessed memory.

He began his primary school education at Presbyterian Mixed School in Adukrom, a suburb of Kumasi, from 1959 to 1963. He continued at No.4 Community 1 Primary School in Tema between 1963 & 1966, where he returned to Kumasi after the demise of his auntie who catered for him during his stay at Tema.

Subsequently, he continued his education at Asawase, L/A Mixed School and finally completed the primary education at Konadu Yiadom School at Ashtown in 1968. Later, in 1968, he began his middle school education at Bantama L/A School. Additionally, he attended Tishigu Anglican School at Tamale in 1969, and returned to Kumasi the following year to AME Zion School at Asafo in 1971 where he obtained the Middle School Leaving Certificate (MSLC)

Between 1973 and 1974, Pastor E. K. Kyei (of blessed memory), the then District Pastor, introduced him to the late Elder J. W. K. Sefa Boakye (the father of Pastor Prince Joseph Sefa Boakye of Budumbura District) who employed him as a Messenger at the Victory Insurance Consulting Limited, a private insurance brokers company that was owned by late Elder Sefa Boakye.

He also got engaged in Timber and Sporting Businesses after his middle school education and gained full employment in November, 1976 at A. G. Timbers Ltd as the Export Clerk at the Veneer Department. (We want to acknowledge and appreciate the late Pastor E. K. Kyei for his immense support and fatherly love to Mark) However, in 1988, due to his intense interest in entrepreneurship, he resigned from the formal sector to establish his own businesses until 1993 where he accepted the call of God into the full-time ministry.

On Saturday, 23rd April 1983, he got married to Miss Grace Gifty Anane at Bompata Assembly of The Church of Pentecost. The marriage was officiated by the immediate past Chairman of the Church, Apostle Professor Opoku Onyinah (who was then the Kumasi District Pastor). God has graciously blessed their marriage with two beautiful ladies and two gallant men, who are all doing very well in the Lord.

Despite the fact that he used to escort his mother to Church religiously, the decision to accept Christ strongly dawned on him in 1971 during a District Lord’s Supper prayer meeting at Bompata Assembly where he worshipped.

Therefore, to make all righteousness complete, he offered himself for water baptism in November 1972 by the late Pastor S. A. K. Karikari.

Mark Egyir Arthur was called into the full-time ministry in 1993. He served at some stations and held some positions in the various Areas he worked as a Minister of God. He was first stationed at Oppong Valley (1993-1999), and later went to serve at Banda (1999-2004), Nkwantanum District (2004-2009), Dome District (2009-2014) and finally Afrancho District, where he will bring his ministerial service to an end.

By the unending mercies of God, Pastor Mark Egyir and Mrs. Grace Gifty Arthur will gloriously retire from active service on Sunday, July 28, 2019 at Afrancho Central Assembly. To God be the glory!