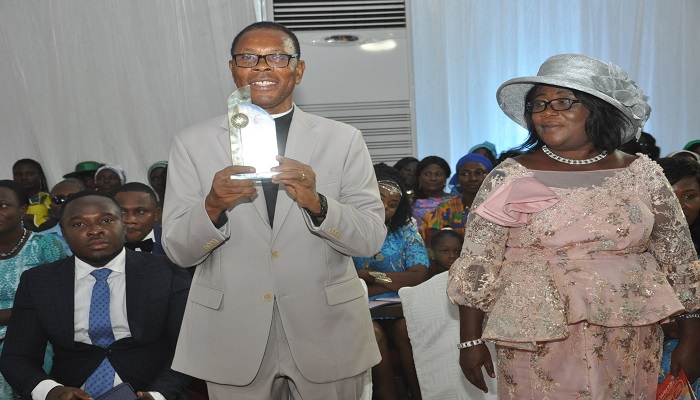 Pastor Kenneth and Mrs. Jennifer Arthur of Nima District in La Area of The Church of Pentecost were officially retired from the active ministerial service of the Church on Sunday, July 28, 2019, after serving meritoriously for 25 years.

The retirement service, which was officiated by the La Area Head, Apostle John Osei Amaniampong, was held at the Dome of the Pentecost International Worship Centre (PIWC), Kokomlemle.

Speaking at the service on the goodness of God with Scripture references from Psalm 145:1-9 and Psalm 34, Apostle Amaniampong thanked and exalted God for His goodness towards humanity.

Pastor Kenneth Arthur who got converted in 1973 was called into the full-time ministry in 1994. He was confirmed as an Overseer in 1996 and called into the Pastorate in 1999. He has served in five duty stations, namely Apowa, Asempaneye, Adeiso, Asuofua and Nima districts under Takoradi, Sefwi Wiawso, Asamankese, Suame and La Areas respectively.

Pastor Arthur got married to his wife Jennifer in 1982 and have been blessed with six children, three males and three females.

In his response, Pastor Kenneth Arthur read from 1 Corinthians 16:13-14, and encouraged the gathering to be on their guard, stand firm in the faith and do everything in love to the glory of God.