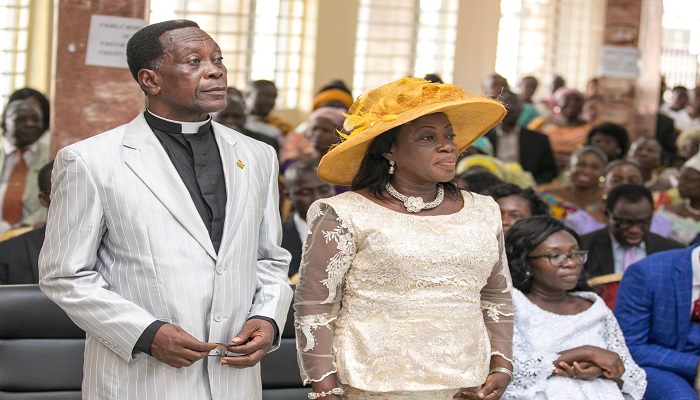 Pastor Joshua & Mrs Rose Yirenkyi-Smart were officially retired from the active pastoral service in The Church of Pentecost after serving meritoriously for 25 years. Their retirement service took place at the Abeka Central Assembly in the Kaneshie Area on Sunday, July 28, 2019.

Speaking at the service on the topic, “Finishing Well: The Conclusion,” with scripture references from Ecclesiastes 7:8 and 2 Timothy 4:7, Apostle Dr Daniel Walker said that everything that has a beginning has an end. “God is the beginning and the end but He has no beginning and an end,” he explained.

He said that life, day and any other endeavour that human beings engage in have an end. He noted that the end of a matter is better than the beginning. He, therefore, advised Christians to always finish every good work they start in life because it is only at the end that they shall receive their rewards, saying, “Some people start their assignments very well but do not end well, while others start poorly but end very well.”

Apostle Dr Walker intimated that the journey between the beginning and the end of an assignment is not always a smooth one. “There are always huddles to be jumped to successfully end an assignment,” he stressed.

Using King Saul and King David as a case study, the PUC Rector revealed that they both had challenges during their reigns in Israel but the distinguishing factor was how they both responded to their challenges.

He stated that David was forgiven his sins because he prayed to God and asked for forgiveness. On the other hand, he said, Saul was rejected by God because of the way he responded to his challenges, adding that even though King Saul began well, he ended poorly.

Apostle Dr Walker concluded by admonishing believers to throw off every weight, cut off every sin, run with patience and perseverance the race marked for them, stay focused and fix their eyes on Jesus Christ.

Giving their testimony, the New Fadama Worship Centre described Pastor Yirenkyi-Smart Snr. as “a man with a humble, gentle and calm disposition but very firm, frank and fair,” it added: “Due to his knowledge in the church’s history, Pastor Yirenkyi-Smart Snr. earned accolades such as “History personified,” “Jerusalem to Asamankese,” and “Walking encyclopaedia of history.”

His wife, Mrs Rose Yirenkyi-Smart, was also described by the Women’s Ministry as a mother who always sought to quench the thirst or satisfy the hunger of members after church service. “She did this by keeping an ice-chest in her car boot,” the testimony said.

She was also described as a giver who gave gifts to members and officers alike during festive moments.

In his final words to the congregation, Pastor Yirenkyi-Smart Snr. encouraged them to only boast in the Cross of Jesus Christ like Paul did in Galatians 6:14. He also urged the congregation to hold their families in high esteem, noting that the family is the basic unit of the church.