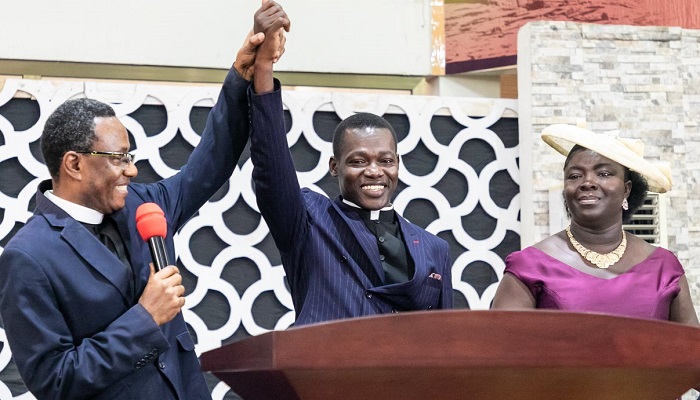 Pastor Ebenezer Hagan has officially assumed directorship of the Youth Ministry of The Church of Pentecost following his induction into office on Sunday, July 28, 2019.

Pastor Hagan takes over from Apostle David Nyansah Hayfron who served as the Youth Ministry Director of the Church for eight years. Apostle Samuel Osei Asante, the Koforidua Area Head and Executive Council Member of the Church has also been appointed as the new Patron of the ministry.

As Youth Ministry Director, Pastor Hagan would be responsible for the administration of the Youth Ministry. He would be responsible for planning special programmes for youth and as well as evangelism initiatives in schools, colleges and the universities. He would also be expected to provide study materials for the Ministry and also chair the meetings of the Executive Committee in the absence of the Patron.

He also acknowledged the great work done by his predecessors, particularly, Apostle David Nyansah Hayfron, who directly handed over the baton of leadership to him.

“The third aspect of the vision, would be to develop the youth holistically by giving attention to their social, emotional, intellectual, personal and physical needs in our intervention deployment. This will make them relevant in today’s world and will equip them to permeate every sphere of society with Christ,” he said.

He also hinted that, under his tenure, PENSA International would be used as a springboard to intensify the missions enterprise of The Church of Pentecost across the globe.

Pastor Ebenezer Hagan was born to Elder Emmanuel and Mrs. Grace Acquah Hagan on 21st May, 1981. He hails from Ekumfi Asaafa in the Central Region of Ghana.

He completed Aggrey Memorial Senior High School in Cape Coast and proceeded to the Kwame Nkrumah University of Science and Technology (KNUST) where he studied BSc. Civil Engineering and completed in 2006.

He has certificates in theology, and project management, and an MA in Pentecostal Studies. He has also completed an MTh degree in Practical Theology (with emphasis on Christian Education and Youth Ministry) at the Trinity Theological Seminary, Legon. His research interest in graduate studies have been on Youth Ministry among African Pentecostal and Charismatic churches.

Before his call into the full-time ministry, he worked with Wilhem Construction Ltd., and later with Associated Consultants (ACON), a Civil Engineering Consultancy firm in Accra.

Pastor Hagan was once the PENSA President for KNUST. He was called into the full-time ministry in 2008 and was stationed at Nyankpala in the Northern Region of Ghana where he served as Area Workers’ Secretary and an Area Youth Leader for Tamale. He was called into the pastorate in 2013. Before his appointment as Youth Director of the church, he served as the PENSA Travelling Secretary for the Greater Accra Region of Ghana.

He is married to Mrs. Priscilla Hagan; and are blessed with three girls – Awuradwoa, Awurafua, and Baaba.