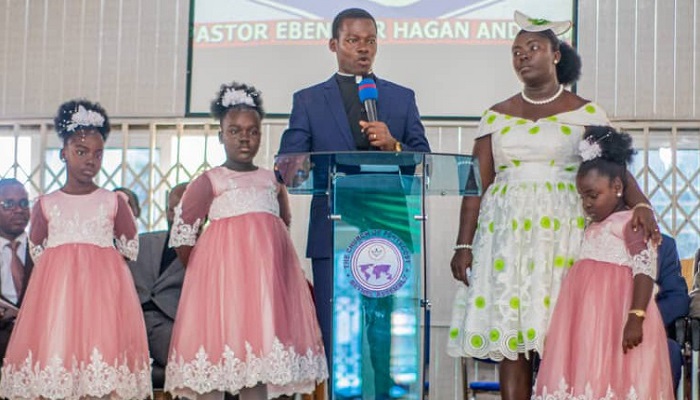 A glorious farewell service has been held in honour of the incoming Youth Director of The Church of Pentecost, Pastor Ebenezer Hagan, and his family. Pastor Hagan has served as the Pentecost Students and Associates (PENSA) Travelling Secretary (TS) for the Greater-Accra Sector for five years.

The service, which was held on Sunday, July 14, 2019, at the Bethel Assembly of the Kwashieman District in the Kaneshie Area, was officiated by the Kaneshie Area Head, Apostle Mike Kwame Etrue.

The event was well attended by representatives of the various PENSA institutions in the Greater-Accra Sector as well as the PENSA Greater Accra working team and alumni who worked with Pastor Hagan during his 5-year tenure.

The Darkuman District Minister, Pastor George Prah Amonoo, who spoke at the event charged believers to be agents of transformation wherever they find themselves in order to possess the nations.

Speaking on the topic, “Being An Agent Of Transformation; A Repairer Of Broken Walls” based on Isaiah 58:12, Pastor Prah Amonoo, explained that the broken walls represent the lives of individuals, families and nations that are in shambles, in ruin and morally depraved.

He further noted that there are a lot of “broken walls” in the contemporary world and that is why God is calling on believers to be agents of transformation.

Pastor Amonoo encouraged Pastor Ebenezer Hagan to seek the face of God and be bold in discharging his new mandate. He noted that God has called him (Pastor Hagan) in this time to repair broken walls in the lives of all young people in the country.

In a testimony read by Elder Joshua Essumang (Sector Head and President of PENSA-Legon) on behalf of the PENSA Greater-Accra Sector, Pastor Ebenezer Hagan was described as a friend, father and a mentor who taught them the unadulterated word of God. Pastor Hagan was also acknowledged for his exceptional leadership skills and his ability to harness and galvanise the potential of all student leaders.

The Kaneshie Area Pastorate also described Pastor Ebenezer Hagan and his wife, Mrs Priscilla Hagan, as a couple whose marriage and family life is admired by all. The pastorate was also grateful to Pastor Hagan for his immense contribution to the growth of the area despite his busy schedules as Travelling Secretary.

The Ladies Wing of the Greater Accra Sector, in turn, described Mrs. Priscilla Hagan as a mother with a heart of gold, who freely loved, genuinely cared for them and corrected them in love. Mrs. Hagan was also appreciated for her practical lessons on house chores and relationship titbits which she gave the ladies whenever they visited the Mission House.