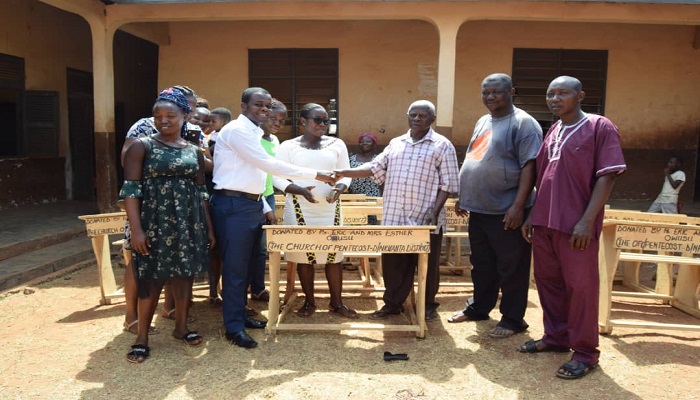 Pastor Eric Owusu and his wife Esther of Donkro Nkwanta District in the Techiman Area of The Church of Pentecost have donated ten dual desks to the Anglican Primary School at Donkro Nkwanta, near Nkoranza in the Bono East Region.

The students’ desks were presented to the management of the school on Friday, March 8, 2019 as part of his contribution to enhancing quality education in the community.

Present at the short ceremony were Reverend Robert Barnabas Anum of the Anglican Church, Donkro Nkwanta; Mrs Duut Minsah, the Head Teacher of the school; Mr Michael Mensah, the Circuit Supervisor of the area, and staff and students of the school.

Reverend Anum, who received the items on behalf of the school, thanked Pastor Owusu and his wife for the kind gesture. Reading from Psalm 20, he pronounced the blessings of God on the couple for their generosity, which he said was worthy of emulation.

In his remarks, Pastor Eric Owusu said he was touched by the plight of the pupils when he visited the school some time ago. “Many of them were sitting on the bear floor during classes and I was so much touched, so we decided to do something to support the children,” he said.

The Circuit Supervisor, Mr Mensah, did not hide his surprise at the gesture of the pastor, saying, “We were not expecting this, it is a big surprise to us.” He expressed his profound appreciation to the couple for the kindness and said it will go a long way to help boost academic work in the school.