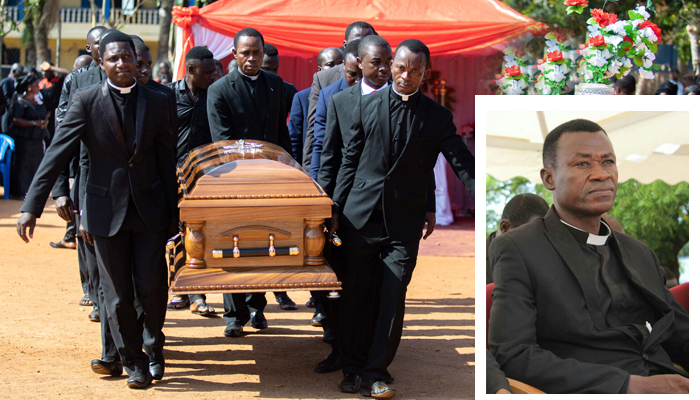 The Asamankese Methodist School Park was filled to capacity as believers from all walks of life thronged there to pay their last respect to the late Pastor Elijah Mahama Akpanyi of Asamankese District of The Church of Pentecost, whose remains were put to rest on Saturday, November 9, 2019.

The solemn event was officiated by the Chairman of the Church, Apostle Eric Nyamekye, assisted by the Chairman of the Eastern Regional Coordinating Committee, Apostle Samuel Osei Asante, the Cape Coast Area Head and Executive Council Member, Apostle Samuel Yaw Antwi, and the Asamankese Area Head, Pastor Isaac Ekow Eshun, among other ministers of the Church.

Pastor Mahama was called to glory on October 14, 2019, at the St Dominic Hospital, Akwatia after a short sickness. He was 57.

Consoling the bereaved family and the gathering, the Chairman assured them that Pastor Mahama is only asleep in the Lord because he would be raised again when Christ returns to take His children with Him to heaven.

He entreated all and sundry to live their lives well so that when they are no more their good works would follow them.

Preaching the sermon on the topic, “We Are Living In A Tent” (1 Corinthians 5:1-3, John 14:1-4), the Suhum Area Head of The Church of Pentecost, Apostle Anthony Eghan Kwasi Ekuban, stated that the human body is a temporary tent which will be destroyed one day.

He said Jesus has prepared a permanent home for His followers in heaven, and that whenever a believer finishes with their earthly assignments, God calls them home to their heavenly home.

He started elementary school at Edobo L/A Primary School in Jomoro District in the Western Region and completed in Winneba in the Central Region.

He was enrolled at the SNAPS College of Accountancy in Takoradi, where he studied Accountancy. He worked as a banker till 1994 when he was called into the full-time ministry of The Church of Pentecost.

According to a tribute by the General Council of The Church of Pentecost, Pastor Mahama acquitted himself very well throughout his 25-year service in the full-time ministry, describing his death as shocking. “The Church has lost an industrious minister who was very hardworking and dedicated to his calling,” it said.

His wife, Mrs Cecilia Mahama, also described him as a brother, an uncle and everything to her. “I adored him as my all,” she said in her tribute, adding, “He loved and cherished me so much.”

“His sense of friendliness was exceptional. He devoted his time and attached seriousness to whatever he was assigned to do. His organizational skill was absolutely par excellence and was a model to us,” they added.