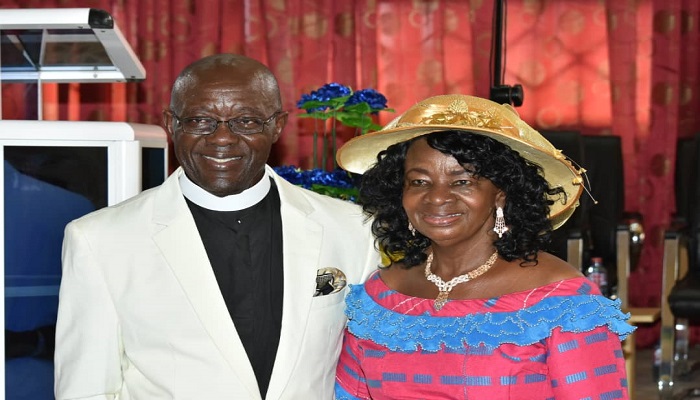 Pastor Dr Samuel Kwesi Asante of Bubiashie North District of The Church of Pentecost has been retired from the active pastoral ministerial of the Church after serving for 27 years in the Lord’s vineyard.

A colourful retirement service was held in his honour at the Bubiashie North Central auditorium in the Kaneshie Area on Sunday, July 28, 2019. The service which was officiated by the International Mission Director (IMD) of The Church of Pentecost, Apostle Emmanuel Gyesi-Addo, was attended by family members, ministers of the Church, well-wishers, among others.

Speaking at the service on the topic, “Why God shows favour” based on Romas 9:14-23, Apostle Gyesi-Addo defined favour as an advantage or benefit someone receives without doing anything to merit it. He added that favour is shown when someone shows another person love and acceptance.

The IMD identified some reasons why God shows favour. The first reason is the fact that God is sovereign (self-governing, self-existence and self-owning) where He owes no allegiance or explanation to any other being. Quoting from Daniel 4:3-35, Job 38, 39, 40 and 41, he stated that God is all in all who shows favour to those he wants to show favour to.

The second reason is that, he said, God shows favour because He is a God of justice and fairness. He quoted 2 Corinthians 8: 13-15 and 1 Samuel 2:8 to buttress this point.

Apostle Gyesi-Addo admonished believers to continually show appreciation to God for the favour He has shown and continues to show them. He noted that many Christians forget where God picked them from and take the credit for themselves.

Giving their testimony, the Bubiashie North District described Pastor Dr Asante as a practitioner of the word of God. “As a minister of God, he practised what he preached and also implemented church policies to the letter.”

He was also described as a humble man who is approachable by members of all ages, educational backgrounds and social status.

The Bubiashie North Women’s Ministry also described Mrs Ellen Asante, his wife, as a woman of faith, a great teacher of the word of God and a seasoned counsellor who offered great counsel to members, especially those preparing for marriage.

“She was also very punctual at all church programmes and a very strong pillar in the activities of the Women’s Ministry,” they said.

Pastor Dr Samuel Kwesi Asante was born on March 18, 1954, at Kwahu-Daah near Nkawkaw in the Eastern Region to Elder Kwadwo Asante and Madam Mary Ama Asantewaa (both deceased). He was baptized in water at Kwahu-Daah in August 1968.

His had his elementary education at Kwahu-Daah Local Authority/Roman Catholic Primary and Middle Schools and obtained the Middle School Leaving Certificate in 1968.

He is a holder of Bachelor of Arts Degree in Religion, Master of Arts Degree in Missiology (Study of Biblical, Theological, Historical and Methodological aspects of Missions), and has a PhD in Ministry from the Oral Roberts University, Tulsa, Oklahoma. His doctoral dissertation research topic was “Process and Qualities for Developing Servant-Shepherd Leaders within The Church of Pentecost for effective cross-cultural ministry.” He also has a number of certificates in other fields.

Prior to his calling into the full-time ministry in 1992, Dr Kwesi Asante worked with a number of organisations, including the State Transport Corporation, World Vision, William Morris Financial, Arcadia, California, Landful Financial, Rosemead, California and Ameriquest Mortgage, Dallas, Texas.

He is married to Ellen and are blessed with two male children.