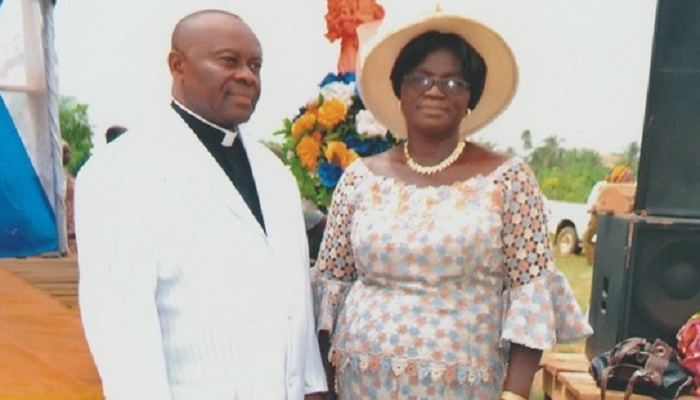 Charles Afful Kankam-Boateng was born on 8th February, 1954 at Fante New Town, Kumasi in the Ashanti Region to Chief James Kankam from Kaase (of blessed memory) and Madam Beatrice Anokye of Atonsu-Agogo, Kumasi. He is the fourth born of his parents’ children.

He attended Kaase, Asafo Zion and Chirapatre Local Authority (L/A) Middle Schools from 1960-1970. He also read a course at the National Fire Service Training School in 1986 in Kumasi and was employed as a Fireman. He later on worked with The Jute Factory, a subsidiary of yhe then Ghana Industrial Holding Cooperation (GIHOC) as Fire Service Officer Grade I, from 1977 to 1987 before his call into full-time ministry.

From 2007 to 2009 Charles attended the Ghana Institute of Languages, Kumasi to read a course in Proficiency in English proficiency.

Charles got converted in Tamale by Mrs. Victoria Nsia, who was a member of the Church Of Pentecost. She introduced him to Christ and invited him to be join their services held in their house. From then, Charles began experiencing the presence of the Lord until April 24, 1973 when the Lord Jesus Christ revealed Himself and His second coming to him. After this encounter, he made a personal decision to accept Jesus Christ as his Lord and personal savior with the help of Mrs. Nsiah. Not long after that, the family moved to Kumasi.

Back in Kumasi, Charles stayed with his elder brother John Kankam (known as “Panyin de Panyin”) and fellowshipped with the Ahinsan Assembly of the Church of Pentecost. He was baptized by immersion on January 10, 1974 by Pastor E. K. Kyei (the late) and received the Holy Ghost Baptism in the same year. However, he left to join a Bible Study and Evangelical Group under the leadership of Onua Adu Jeremiah at Ahinsan. After two (2) years, he returned to the Church of Pentecost following a prophecy he received. Kankam-Boateng came back with twelve (12) members from the Bible study and Evangelical Group. Four out them are currently Elders of the church. They are Elder Charles Poku, (Asokwa) Elder Stephen Boakye Ansah (Asokwa), Elder Francis Opoku Agyemang (Gyinaase) and Elder Joseph Nfum Britwum (Atonsu). Charles was ordained an elder in 1986 and then appointed as a Presiding Elder in the same year.

Charles Afful Kankam-Boateng was called into the full time Pastoral Ministry of the Church of Pentecost on 15th May 1989 through Apostle S. K. Ansong (now Retired) as Probationary Overseer and stationed at Chiraa in Sunyani Area. He was called to the Pastorate in 1994. Through his ministry, the following were recommended and accepted into the full-time ministry – Apostle Eric Kwabena Nyamekye (current Chairman of COP), Pastor Victor Asamoah , Pastor B. O. Kumi-Yeboah, Pastor J. Romeo Quainoo, Pastor Jacob Atta-Arthur and Probationary Overseer Emmanuel Gyimah.

On Sunday, July 28, 2019, Pastor Charles Afful and Mrs. Judith Kankam-Boateng will retire from the active service in the full-time ministry of the Church. May God’s name be praised.