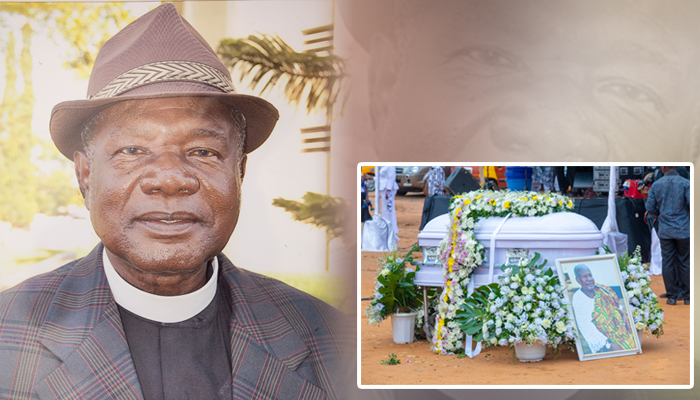 The late Pastor Andrews Tetteh, a retired minister of The Church of Pentecost, was laid to rest on Saturday, September 21, 2019, in Accra after a memorial and burial service was held in his honour at the Odorkor Police Quarters Park.

The service, which was officiated by Apostle David Tettey Tekper (Chairman of the Greater Accra Regional Coordinating Committee), was well attended by many ministers in active service, retired ministers, officers of the church, family members, friends and loved ones to pay their last respect to the gallant soldier of the cross.

In a sermon titled, “It’s all about Grace” based on Ephesians 2:8-9, Apostle Fred Tiakor (Director of Children’s Ministry) noted that whatever a man can achieve in his life is all about the grace of God. He stated that God expects believers to show appreciation to Him by glorifying Him with and in their lives.

“We are therefore expected to glorify and show appreciation to God for His grace at all times,” he noted.

According to the Children’s Director, there are various categories of grace that the Lord bestows on believers. This, he said, include common grace and special grace.

He explained that common grace refers to the daily blessings of sunlight, air and rainfall every human being enjoys. He, however, noted that believers enjoy the special grace of God which is qualified with adjectives like “undeserved,” “wonderful,” “overflowing,” “abundant,” and “great.”

Consequently, he admonished believers to eschew any form of arrogance and pride in order to reflect the nature of Christ as they enjoy the grace of God.

The late Pastor Andrews Tetteh was born on 10th June 1935 at Plauoduwanya. He had his primary school and middle school education at Amanfro-Kumikrom, near Asamankese and Yilo State School, Somanya respectively.

He was called into the full-time ministry of The Church of Pentecost in a dramatic way while he was working with the then UTC Motors Company in 1974. After narrowly escaping death in an accident, an angel appeared to him while he was on admission at the hospital with the message, “Andrew, do not be stubborn, I have called you, and where do you think you can run to?” He accepted the call to full-time ministry after this experience.

In his 26 ministerial journey, the late Pastor Andrew Tetteh served in six districts, namely Battor, Tefle, Anloga, Enchi, Asawinso, and Begoro as District Minister and later at Kete-Krachi and Mampong Areas as Area Head. He retired from the active ministry in the year 2000.

His children described him as a great disciplinarian who did not mince words in ensuring that the right thing was done. “Daddy was a gentleman of his time. He dressed in a well-ironed suit and neatly polished shoes. He never compromised on his integrity,” the tribute said.

The tribute given by the General Council of the Church described the late Pastor Andrews Tetteh as a disciplinarian who stood by his words and ensured that the Pentecostal heritage was guarded for posterity.

“He was a versatile minister who did the bidding of his master. His zeal for evangelism was highly commendable. He was passionate for saving lost souls as he went all out to preach the unadulterated word of God,” the tribute said.