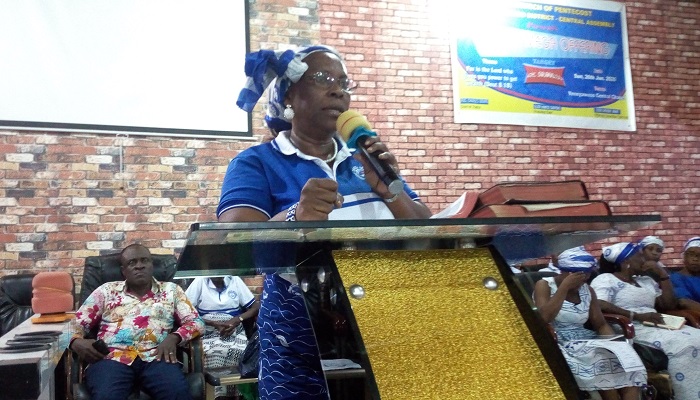 The wife of the Yennyawoso District Minister of The Church of Pentecost, Mrs Gladys Oduro, has called on parents to live exemplary lives for their children to emulate.

“It is expedient for children to develop a personal relationship with God at a tender age, so that the character of Christ will be inculcated into them and that they will be deeply rooted in Him when they grow up,” she said.

Mrs Oduro said this on Friday, February 21, 2020, at the maiden District Women’s Ministry Joint service, which was held at the Yennyawoso Central Assembly auditorium.

Delivering a sermon on the topic, “Raising Godly Children to Possess the Nations,” she indicated that parents are primary role models for their children and as such, it behoves on parents to exhibit godliness in all their endeavours to have a positive impact on their children.

Referring to some proven research findings, she noted that 85% of every child’s life is influenced at home. She, therefore, posited that parents play a huge role in determining how their children turn up in future.

“This places the onus on the parents to have a sense of moral rectitude to positively affect the lives of their children so that the Church and the nation will have a bright future,” she added.

Reading from Malachi 2:15, she explained that one reason for the institution of marriage was for couples to raise godly children. She stated that “children are not born with the proclivity for godliness but it is the responsibility of parents to raise and train them to become godly.”

Admittedly, Mrs Oduro noted that good parenting is an overwhelming task which requires time and monitoring, she, therefore, cautioned parents against the habit of devoting all their time to work to the neglect of their children.

“Though, as parents, we must work in order to meet the physical needs of our children, however, this does not mean neglecting our children. We must have the well-being of the children at heart and monitor them, both at home and in school by paying constant visits,” she advised.

She cautioned that “Children are a heritage from the Lord and as such parents would be held accountable if they make them go astray.”

She also advised the young ladies to heed to the counsel of their parents in choosing a life partner.
In attendance were Pastor Charles Oduro (the District Minister), leaders of the Women’s Ministry at the district and local levels, among others.