Own Vision 2023 And Run With It – Apostle Nyamekye Tells Ministers 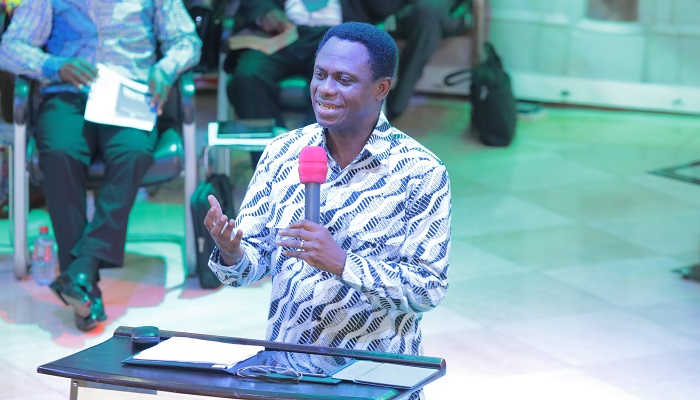 Own Vision 2023 And Run With It – Apostle Nyamekye Tells Ministers

The Chairman of The Church of Pentecost, Apostle Eric Nyamekye, has appealed to ministers and their wives of the church to own the 5-year vision dubbed: Vision 2023 and run with it in order to make the vision of “possessing the nations” a reality.

Apostle Nyamekye made the appeal when he interacted with ministers and their wives in the Accra West Zone of the Greater Accra Region at the Odorkor Central Assembly auditorium on Friday, September 14, 2019. In attendance were ministers and their wives from the Odorkor, Kaneshie, Dansoman, Anyaa Ablekuma, Achimota, Kasoa, and Downtown-Ofaakor areas.

Addressing them, the Chairman expressed disappointment about reports he had received from some members of the church which claimed that their ministers were not committed to the implementation of Vision 2023.

He said that Vision 2023 should not be considered as a vision of the Chairman, but what the Lord is doing in this time.

“God has prepared each one of us for His purposes and He can choose any one of us as a leader based on what He wants to do at a particular point in time. Therefore, when God chooses a leader, He stirs up what He has deposited in them.

“However, because the leader cannot do it alone, the leader must share it with others as a vision so that together they would run with it and ensure its realisation. Vision 2023 is, therefore, not my vision, rather it is what God wants to accomplish through the Church at this time.

“God is calling on us (the church) to possess the nations at this age because we can! Now, The Church of Pentecost has enough numbers and the prestige (high reputation) to influence every sphere of the nation with Kingdom values and principles,” he said.

Reading Ephesians 3:10, which he described as the general theme text for Vision 2023, he emphasized that the church was not an end in itself but a medium through which God intends to reach out to the world.

Apostle Nyamekye, therefore, admonished ministers not to be satisfied with having big church auditoriums or a lot of members while the communities in which they reside are filled with evil and darkness. Instead, he stated, they should be interested in equipping members of their churches and deploying them into the communities as ‘Light of the World and Salt of the Earth’ to dispel the darkness and stop the moral decadence in society.

He reiterated that the overall goal of Vision 2023 is to equip members of the church and release them into the world to influence their spheres with Kingdom principles and values, thereby turning many to Christ.

He, therefore, advised ministers and their wives to be committed to realising the goal of the vision and ensure that activities and teachings at their respective churches in the next five years are geared towards meeting the overall objective.

Touching on the implementation framework of Vision 2023, Apostle Nyamekye explained that the church has adopted three strategic approaches in implementing Vision 2023. They are: Equipping members to possess the nations, Transforming society and strengthening and realigning church institutions and structures.

In justifying their transfer to the Greater-Area Region, which he touted as the seat of the church, Apostle Eric Nyamekye advised ministers and their wives not to renege on their ministerial duties but work hard to ensure the growth of the church, especially since the churches in the region contribute significantly to the financial strength of the church.

He also urged them to be devoted to the effective implementation of Vision 2023 because their congregants expect them to lead the charge in efforts to realise the vision at their various stations.

The event was the second leg of the Chairman’s meeting with ministers and wives in the Greater Accra Region after his interaction with ministers of the Accra East Zone comprising La, Madina, Teshie-Nungua, Tema, Ashaiman, and Haatso Areas.