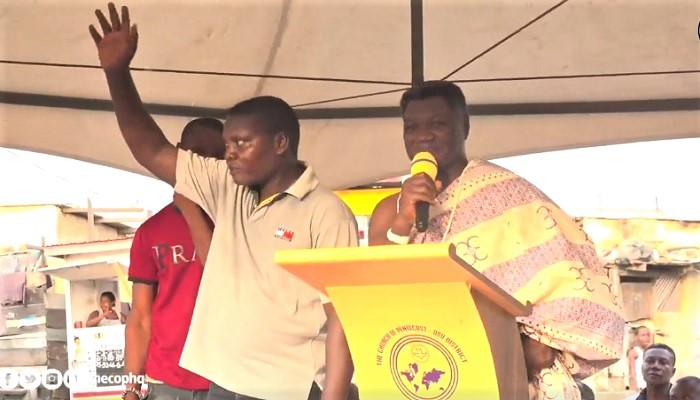 Nii Djamlodja VI, Chief Fisherman of Osu Alata, a small fishing community within the Osu District, has instituted a Sanitation Taskforce to promote sanitation in the area.

The Chief revealed this on Wednesday, February 26, 2020, during a community durbar organized by the Osu District of The Church of Pentecost at the Osu Mandela Park as part of the National Environmental Care Campaign week being observed at all levels of the church.

In his remarks, the Osu Alata Chief said that poor sanitation continues to be a key challenge of the community.

He recounted that the Osu District, in some time past, organized a cleanup exercise in the community and desilted all the choked drains, but it was back to its poor state only after two days.

According to Nii Djamlodja, all effort to get the community folks to change their attitudes towards the environment has proved futile, hence the need to institute a sanitation taskforce

“In football, when the strikers are unable to find goal-scoring opportunities, they send the ball all the way back to the goalkeeper so that the team would try other strategies in opening up the defence of their opponents. In the same way, since previous efforts have failed, we have now instituted the Sanitation Taskforce to enforce cleanliness and we are hopeful that this initiative would help us achieve the goal of a clean environment,” he said.

Adding to the Chief’s remarks, the Kyedomhene of Osu Alata, Nii Adam Sorse II, said that the Sanitation Taskforce has been advised to discharge their duties without fear or favour, and warned that anyone found culpable for doing anything untoward to the environment would be severely dealt with.

The head of the Osu Alata Taskforce, Nii Adam Okyeame, who was present at the event, was introduced to the gathering.
The Osu Alata Community Durbar was attended by the General Secretary of The Church of Pentecost, Apostle Alexander Nana Yaw Kumi-Larbi, the La Area Head, Apostle John Osei Amaniampong, and the Osu District Minister, Pastor Simon Antwi.

Also present were the various stakeholders of the community including representatives from the Ghana National Fire Service, Ghana Police Service, Muslim community, among others.