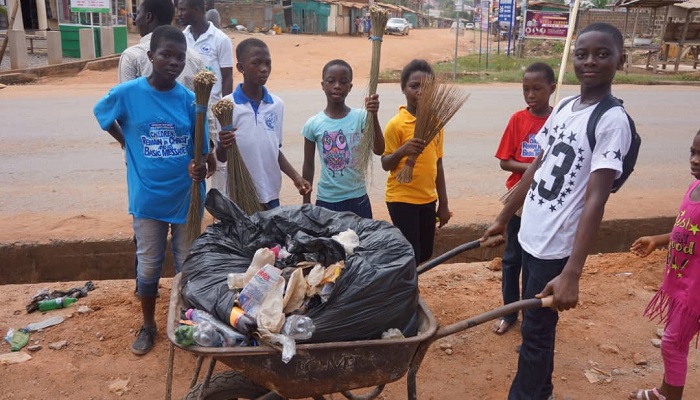 For The Church of Pentecost to possess the nations, there must be an effort to possess children who are the hope of tomorrow and the future.

The Church’s Environmental Care Campaign was given a major boost following a clean-up campaign embarked upon by the Children’s Ministry of the Ofankor District in the Achimota Area of the Church on 6th March, 2019 which marked the 62nd Independence Day Anniversary of Ghana.

The exercise, which saw the children desilting the gutters and clearing up garbage on the principle streets of Ofankor, was intended to instill the spirit of patriotism in the children.

Accompanied by the Area Children Evangelism Brass Band, the children also carried placards with inscriptions such as: “A Clean Environment Is A Collective Responsibility; So Play Your Part,” and “I Am Responsible; I Segregate My Waste,” among others.

The Area Children’s Ministry Leader, Pastor John Afawuah, commended them for embarking on the exercise. He revealed that the Area Children’s Ministry is poised for more action, as they are getting ready to campaign in schools and communities with relevant crafted songs, short video drama, poems, and others, to sensitise children and the general public on the Church’s Environmental Care Campaign.