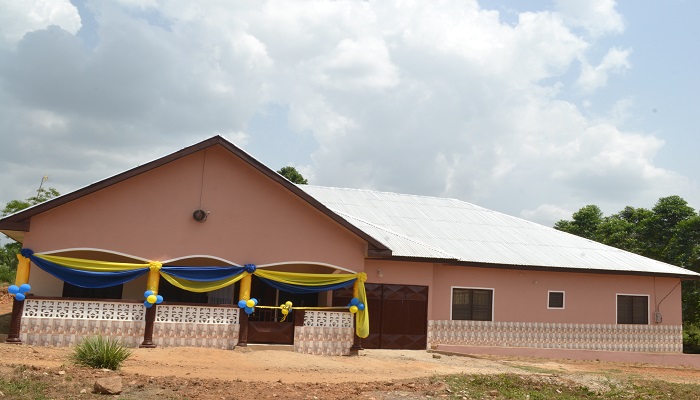 A memorable service has been held at Odumase in the Suhum Area of The Church of Pentecost to dedicate their District Mission House.

The dedication service, which was held on Sunday, February 24, 2019, was officiated by the Suhum Area Head, Apostle Anthony Eghan Kwesi Ekuban, assisted by the Odumase District Minister, Overseer Matthew Sedeka, and the pastorate in the Area. Also present at the service were the wife of the Area Head, Mrs. Jennifer Ekuban and Nana Obuobi Atiemo, Chief of Akyem Odumase.

The Odumase District was carved out of Apedwa District in May 2017. The land for the project was acquired in 2008 at the cost of GH¢680.00 and the sod-cutting ceremony performed by Apostle Mike Etrue, the then Area Head in 2017.

In a sermon, Pastor Patrick Kantam Konla, the District Minister of Asiakwa, admonished Christians to always build their faith on Christ who is the solid rock.

Speaking on the topic, “The Foundation of the Church” based on Mathew 16:17 and 1 Corinthians 3:11-12, Pastor Konla explained that two groups of Christians can be identified based on their foundation in Christ.

According to him, the first group that signifies true repentance and trust in Christ are those who lay their foundation with gold, silver and fine stone. The other group that portrays the old nature of man are those who use wood, hay and stubble to build on the foundation.

He entreated Christians to lay good foundation, saying, “The strength of a building largely depends on how good the foundation is.”