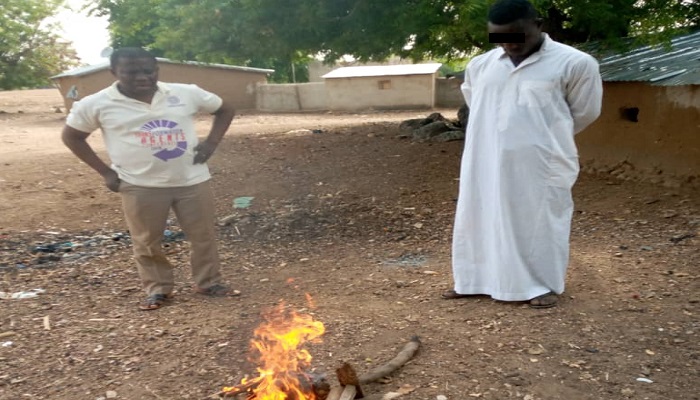 A leader of an occult group [name withheld] was one of the seven souls who surrendered their lives to Christ during the opening session of the 2019 Chiana Zone Easter Convention in the Bolga Area.

He made this confession during an interview with PENTECOST NEWS after the service.

According to him, initiation into the occult group in his local community was opened to those who were ready to sacrifice fowls at the cemetery at midnight. This he said gave him special powers to chant, summon spiritual meetings and disseminate information to members of the group through their dreams.

After receiving counselling on the need to surrender his idols he agreed to hand them over to be burnt on his behalf.

Pastor Philip Pascal Asiedu and Overseer Alex Kojo Adjani, who were present at the zonal centre for the convention received the idols, prayed over them and burnt all of them in his presence.

Among the items burnt were a ring said to be his source of strength, a metal bangle, which was his symbol of authority as the leader of the group, an animal tail, two stones which were removed from a local grave, a bone, knife for their operations, cowries and other traditional symbolic objects.

In a rather more encouraging fashion, he received Holy Spirit Baptism as he underwent water baptism. He has since remained a passionate member of The Church of Pentecost.

On completion of his final exams being conducted by WAEC for Senior Secondary Schools, WASSCE, he will be integrated into the Navrongo District of The Church of Pentecost.

To God be the glory.