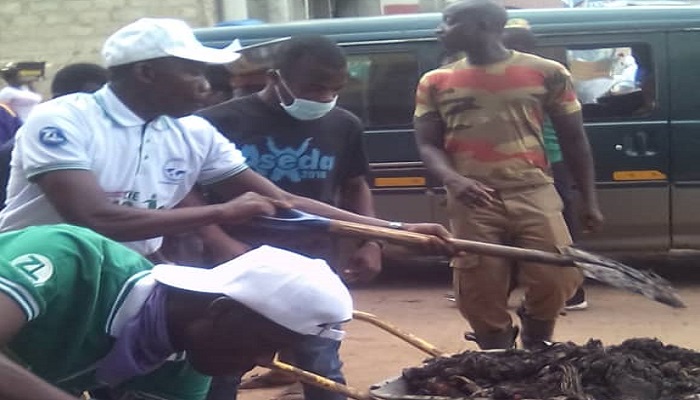 The Obuasi Area of The Church of Pentecost, in collaboration with Zoomlion Ghana Limited and the Obuasi Municipal Assembly, has launched the Environmental Care Campaign on Saturday, 23rd February, 2019 at Bidieso Central Auditorium.

The Area Head, Apostle Martin Seth Appiah, in his speech called on Christians to make sure that their homes and environments are clean, adding that God created man and put him in the Garden of Eden to cultivate and keep it, meaning man was assigned to keep the environment in which he is living (Genesis 2:15).

The programme with the slogan, “My Environment, My Responsibility,” was attended by Nana Barima, an elder of the Church who represented the Adansihene, Opagyakotwere Bonsrah Afriyie.

In an address, Nana Barima said traditional authorities are doing all they can to reduce or eliminate filth in their various communities. He however appealed to government to restore the powers of prosecution to traditional rulers in order to nib the menace in the bud.

A representative of the Obuasi Chief Imam expressed his joy over the initiative by the Church to improve environmental cleanliness in the country. He said that Muslims in the municipality are propelled to support the initiative. He also asked Ghanaians to let their religious beliefs reflect in their daily activities in order to safeguard the environment.

The District Chief Executive of Obuasi East, Hon. Faustina Ammisah, noted that many diseases are caused by filth. She therefore called on all stakeholders to come onboard in the fight against filth in the country.

The committee showed a documentary which captured some filthy areas in Obuasi where careless dumping of refuse and open defecation are prevalent. They called on the congregation to embark on clean-up exercises at major places like the Obuasi government hospital, Bidieso School Complex, Obuasi Central Market, among others.

A clean-up exercise was later undertaken by the Church to free drainages and tidy up some filthy places in the municipality with support from personnel of the Ghana National Fire Service.