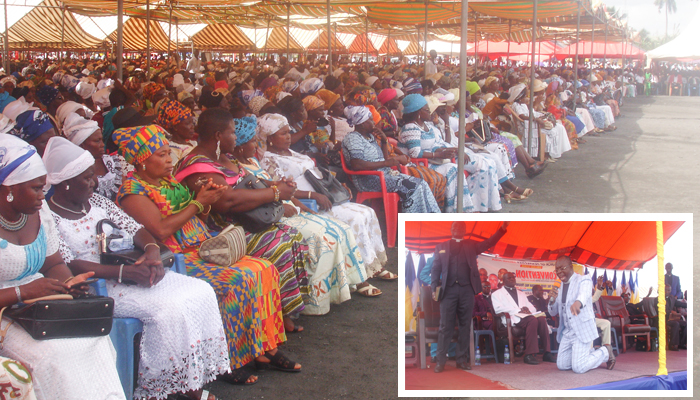 The Obuasi Area of The Church of Pentecost, under the leadership of Apostle Martin Seth Appiah, has ended the 2019 Easter convention in a grand style.

The convention which took place from Wednesday, 17th to Sunday, 21st April, 2019 at two Zonal centres- Anwhiaso and Obuasi, was on the theme, “Weep Not! The Lion of the Tribe of Judah Has Triumphed” taken from Revelation 5:5, John 19:25-27.

Among the dignitaries at the service were Pastor A. Y. Kumi (Rtd.), Apostle Samuel Badu Nyarko (Rtd), and Apostle Ephraim Kwabena Barabu (Rtd).

Climaxing the convention on Sunday at the Obuasi zone with a sermon on the topic, “This Position Is By Grace, Let’s Stay In It” based on Romans 11:11-24, Ephesians 2: 1-8, Apostle Martin Seth Appiah said it took the grace of God to offer Jesus Christ as a ransom for the redemption of the world.

He stated that the tribe of Judah did not qualify in any way to produce the Messiah because the mother of Judah (Leah) was neither loved nor beautiful (Genesis 29:16-31). Again, he said, Judah slept with his in-law (Genesis 38:1-30) and also happened to be the fourth born of Jacob.

He, however, said Judah, whose name means “Praise,” was chosen by grace to be blessed by Jacob amongst his twelve brothers when their father was giving his last words before death – Genesis 49:1-28.

He said it is in the same vein that Christ has redeemed Christians from various families and have brought them to be part of the tribe of Judah by grace. Hence, Christians must live a sacrificed life for God, live an evangelistic life to possess nations for Christ, and live a loving life to the glory of God.