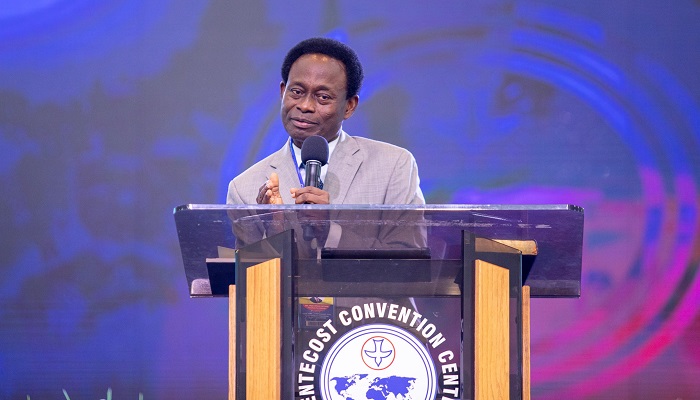 The immediate past Chairman of The Church of Pentecost, Apostle Professor Opoku Onyinah (Rtd.), has said that although plagues affect all people, Christians will always be spared from its rippling effects if they are obedient to God and comply with given directives.

This was contained in a message he preached via Facebook Live on Thursday, April 30, 2020, during an online midweek service of the Pentecost Students and Associates (PENSA), Korle-Bu branch.

The sermon, which was under the topic, “The Bible, Plagues and COVID-19,” touched on the biblical view of plagues in relation to the novel Coronavirus (COVID-19) pandemic.

In his sermon, Apostle Prof. Opoku Onyinah explained that plagues are generally associated with diseases, calamities, havocs and evils that humankind goes through on earth. He identified the great flood in the time of Noah and the famine in Egypt during the time of Joseph as examples of plagues in the Bible.

Touching on the ten plagues that God brought upon Egypt in the events that culminated in the deliverance of the people of Israel from captivity in Egypt, the revered theologian gave an insight into why God decided to harden the heart of Pharaoh, the King of Egypt.

Through comparative reading of Exodus 4:21 and Exodus 3:19-20, he established that God decided to bring the plagues upon the Egyptians because He foreknew that the King of Egypt will be reluctant to set His people free unless by divine intervention.

He explained that the first nine plagues took place among the indigenous Egyptians, however, the last plague affected the whole land including Goshen, which was the dwelling place of the Israelites.

From the narrative on the last plague, the former Chairman revealed that plagues can be a sign from God. He, however, stressed that salvation from such plagues only comes by faith in the Lord Jesus Christ.

He explained that plagues, in general, affect all people including Christians, however, whenever the believer responds to God in faith and is obedient to given directives or precautionary measures they will be exempted from its effects or consequences. He read from Exodus 15:26 and Deuteronomy 28 to illustrate further that obedience to God spares the people of God from the effects of plagues.

Reading 2 Kings 17:7-8 and Joel 2:13-15, he taught that the prophets in the Old Testament always associated every calamity, including a defeat at war, poor harvest, captivity and diseases, that befell the Israelites to their disobedience to God due to their lack of faith in Him.

In the New Testament accounts, on the other hand, Apostle Prof. Opoku Onyinah read Luke 13:1-5 to explain Jesus’ perspective on the calamity that befell some Galileans and the death of the eighteen people on whom the tower of Siloam fell.

According to him, from Jesus’ teachings, one could deduce that calamities can be a consequence of sin. This, he noted, was the reason why Jesus charged the people to come to repentance or they shall also perish in Luke 13.

He, therefore, indicated that plagues would continue to happen on earth if humanity continues to disobey the Lord (Matthew 23 and Luke 21:10-11).

Drawing lessons from the Early Christians in Acts 11:27-30, Apostle Prof. Opoku Onyinah pointed out that a famine occurred in the world in the time of Claudius Caesar which also affected Christians at the time. He explained that the Christians response to the famine was to provide relief for their brethren and others who were in need according to their ability. He, therefore, challenged Christians to emulate the early believers by reaching out to those who are in need in this difficult period.

He also urged Christians to intercede for the nations in which they dwell because any calamity or suffering that befalls it also affects them, adding that, “God always provides a way to protect His own in the event of plagues through obedience.”

Apostle Prof. Opoku Onyinah remarked that plagues like COVID-19 are evils that must not happen often. He added that considering the happenings in this postmodern world, COVID-19 is an indication of the anger of God on His creation, reiterating that “for the Lord to protect His own, we must obey His instructions.”

He said that sometimes God uses plagues to draw people back to Himself especially in these times when the world is moving further and further away from the Creator and sin has increased while evils such homosexuality have become prevalent.

“We have gone astray from the Creator. Could COVID-19 be a way through which God is bringing people close to Himself?” he quizzed while urging people of the world to have a new perspective of life and seek the Lord.