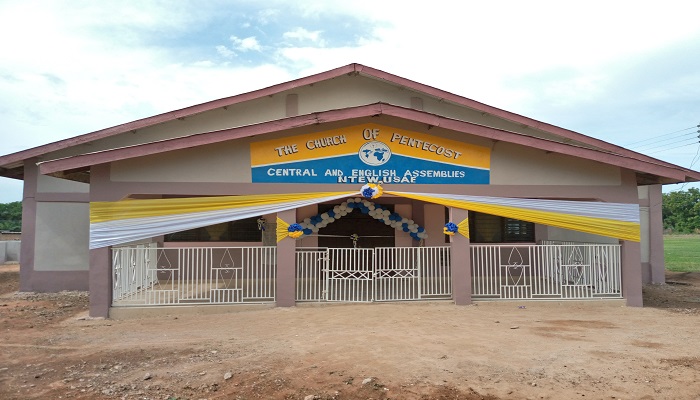 The Ntewusae Central church building in the Kete-Krachi Area of The Church of Pentecost has been dedicated.

The auditorium was dedicated by the Area Head, Apostle Komi Edina Agbavitoh, on May 29, 2019. He was assisted by the Ntewusae District Minister, Pastor Ernest Perbi-Asare, and the pastorate in the Area.

Reading a brief history about the assembly, Elder Sampson Abochi Mingah, stated that the church in Ntewusae began in the 1980s under the Kete-Krachi District. The Ntewusae District was however created in the year 2000 with Pastor Thomas Tete Asare as the first minister, who began the project in 2001.

Pastor P. P. K. Ahamadia who took over the administration of the district in 2005 continued the project with zeal but was transferred in 2010. His successor, Pastor Richard Osei Mensah worked very hard on the project, and in 2014, the foundation stone was laid by Apostle Frederick Kweku Andoh, the then Area Head.

The current minister, Pastor Ernest Perbi-Asare, upon his transfer to the district in 2015, continued the work in earnest thereby completing it this year.

The project received significant financial support from the Head Office and the Kete-Krachi Area and other benevolent individuals.

Speaking at the service on the topic, “Are you part of the Church or you are just in the Church” Pastor William Offei Antwi of Krachi Lakeside District admonished Christians to be of one mind and get involved in the building of God’s church to possess the nations.

Reading from 1 Corinthians 12:14-27, he explained that God has different kinds of people in the Church who are to cooperate with one another to champion the work of Jesus Christ, stressing that “where God wants to use you in the church is where He has placed you.”

Pastor Antwi indicated that every act of service demonstrated by Christians in line with the gospel is very important before God. Touching on the importance of working for God as a team, the Krachi Lakeside District Minister said that God has deposited in every believer talent and skill which must be used in the church to help build the church to grow physically and spiritually.

He admonished all and sundry to continue with the good works they are doing for Lord, adding that “our labour shall not be in vain.” He also called on Christians to live righteous lives for Christ, imitate His examples, establish good human relations with others, live peacefully with their neighbours, and support the Church with their resources in order to actualize Vision 2023 of the Church.

“Work selflessly without expecting anything from the church; let your faith be backed with works and be involved in helping to develop the church which Jesus Christ bought with His precious blood,” he noted.

After the exhortation, Apostle Agbavitoh led the gathering to pray for the Church, the nations as well as the government.

Present at the event were: Nana Ampong I (Chief of Ntewusae) and his elders, Mrs Philomina Agbavitoh (wife of the Area Head), among others.