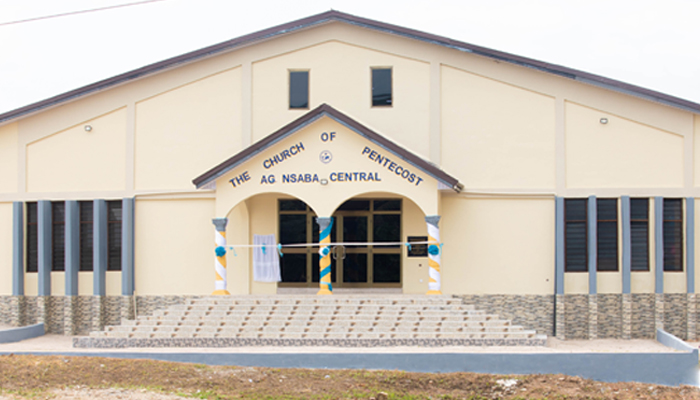 The edifice was constructed at a total cost of GH¢ 373,926.70, with funding from the Headquarters, district and contributions of members.

The church at Nsaba started in 1956 with 11 members under the Agona Swedru District. It was established by an evangelism team from Akim Akroso under the leadership of the founder, Pastor James McKeown. The late Elder Charles Kumi was made the leader of the assembly. The members worshipped in a wooden corn mill structure built by Opanin Kobina Ofori. Opanin Ofori later sold out the land and the wooden structure to the church.

The Nsaba District was created in 1993 when Pastor Anane Babae was the Swedru district minister. As the membership kept increasing, the Elder Charles Kumi and his local presbytery acquired a piece of land from the Achimota Royal family of Agona Nsaba.

Overseer Emmanuel Gyesi-Addo (now Apostle and IMD of the Church) was the first minister to be transferred to the district. He was transferred from the district after he had served for two years and was replaced by Pastor Eric Nyamekye (now Apostle and current Chairman of the Church) in 1995. Pastor Eric Nyamekye in 1997 saw the need to put up a big church building to accommodate the increasing church membership.

When the current District Minister, Pastor John Kodwo Ackah took over, he continued the project in earnest and has completed it for dedication.