No Jesus No Life! – Apostle ANY Kumi-Larbi

Home - News - No Jesus No Life! – Apostle ANY Kumi-Larbi 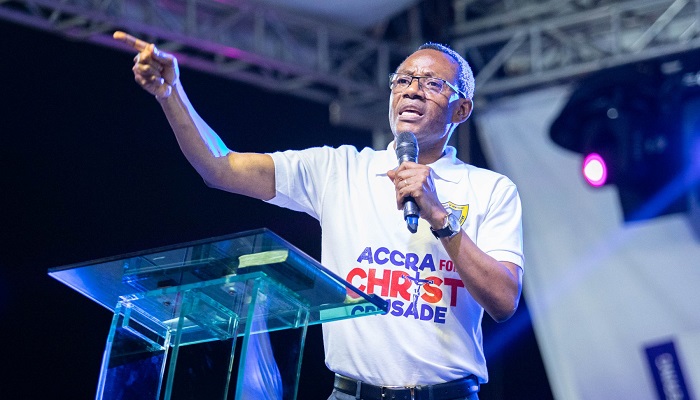 No Jesus No Life! – Apostle ANY Kumi-Larbi

The General Secretary of The Church of Pentecost, Apostle Alexander Nana Yaw Kumi-Larbi, has said that without the saving knowledge of Jesus Christ, life on earth is meaningless.

Apostle Kumi-Larbi said this on Wednesday, November 20, 2019, when he spoke to a mammoth gathering of people who had thronged the Anglican School Park at Kaneshie from far and near to participate in the ongoing “Accra For Christ” Crusade.

Speaking on the main theme of the event, “In Him Is Life” (John 1:4), the General Secretary revealed that there is a vacuum in the heart of every human being which ought to be filled with the life of God.

As a result of this, he said, human beings are unable to find true happiness on this earth and are, therefore, trying every means possible to fill the void created in the heart but to no avail. This insatiable pursuit of happiness in life, according to him, has led many into very precarious situations and habits.

Explaining how this void came about, Apostle Kumi-Larbi explained that when God created the first human beings, Adam and Eve, He breathed into them His life. However, due to their disobedience, they lost the life of God in them. This, he said, brought about death upon the human race because the penalty for sin is death (Romans 6:23).

Apostle Kumi-Larbi indicated that the absence of the life of God and the fear of death has since become a heavy yoke on humanity, thereby making life on earth meaningless and unbearable.

He, however, pointed out that unlike the devil who comes to kill, steal and destroy, Jesus Christ came down to this earth to die for the sins of humanity in order to restore the life of God in them and grant them access to eternal life.

He cautioned that the life of God that Jesus offers is only available to those one surrender to His lordship, He also emphasized that Jesus Christ is the only Saviour of humanity and the only one who has authority and power over death.

He, therefore, urged unbelievers to reach out to Jesus Christ so that they would obtain happiness, peace and joy in this life and the next.

After the sermon, 61 persons took a decision for Jesus Christ by responding to the call to the altar. To the glory of God, 46 of the new converts underwent water baptism at the end of the service.

The opening session of the crusade, which took place on Tuesday, November 19,  yielded 94 souls with 57 of them undergoing water baptism.

The 4-day event is being jointly organised by the National Evangelism Coordinating Committee, Staff of The Church of Pentecost Headquarters and the Kaneshie Area.