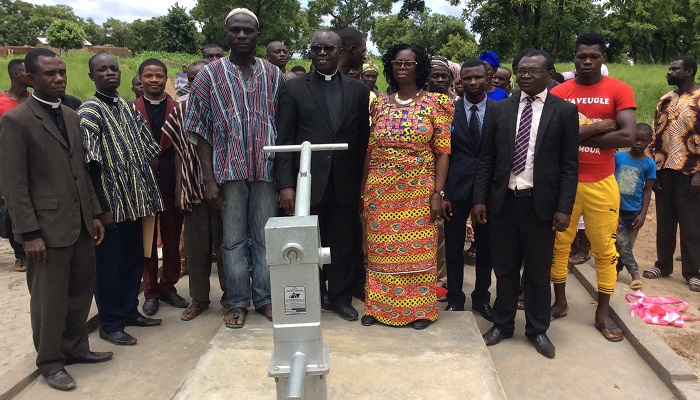 The borehole was constructed following a request by the community elders to the church during the foundation stone laying ceremony for the Nklibito Assembly church building on March 15, 2019.

The facility was constructed at a total cost of GHc12,760.00, out of which GHc12,000.00 was received as an internal Missions grant from the COP Headquarters.

Delivering the sermon at the service with reference from John 4:1-14, Apostle William Ohemeng-Kwakye indicated that, although the borehole will provide physical water to quench the thirst of people of the community, he recommends Jesus Christ who is the living water that never runs out and that whoever receives Him will never thirst.

He explained that Jesus engaged the Samaritan woman in a period where the Samaritans and Jews were not in good terms. However, Jesus Christ reached out to her because He is the gift of God that unites all tribes.

He reiterated that anyone who receives Jesus, receives hope, because without Jesus in the life of individual no one has the hope of eternal life.

He likened the hope of eternal life to seeds that are planted in the ground, however it decays before it begins to germinate. In the same way, anyone who receives Jesus Christ would die and be resurrected after death to eternity to be with the Lord forever.

“Jesus is the living water who can quench the thirst of every person and give you hope,” he indicated.

The Sawla Area, therefore, encouraged the community to accept and receive Jesus the Living Water who is far more valuable than the physical water which has been provided to them by The Church of Pentecost.

“Without the Living Water in Jesus Christ, the physical water provided will be meaningless and will not give enough eternal life. The Samaritan woman accepted Jesus the Living Water and was transformed,” he said.

After the sermon, 2 persons surrendered to the Lordship of Christ and were baptized in water. Also, 3 backsliders were won to the glory of God.

The Area Head informed the community that the initiative forms part of the church’s community development efforts in line with Vision 2023.

On his part, the Nklibito Chief expressed gratitude to the church for the facility and entreated the people in the community to take good care facility to ensure a longer lifespan especially because it is the only source of drinking water for the community and its environs.