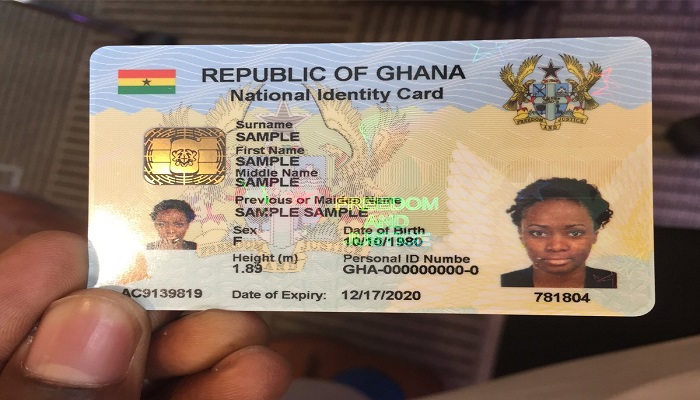 The National Identification Authority (NIA) will begin a mass registration and Ghana Card issuance exercise in the Greater Accra Region from Monday, April 29, 2019, and end on Saturday, July 6, 2019. The region has been divided into two zones: Accra West and Accra East, where registration centres will be opened at specific locations.

The Chief Executive Officer of the NIA, Professor Ken Attafuah, who announced this at a press conference in Accra yesterday, also highlighted some successes of the authority since the first phase of the revamped National Identification System (NIS) project was rolled out on September 15, 2017.

“I want to assure the people of this country that we have learnt lessons from the pilot phase and have, therefore, fine-tuned our technical systems and also developed methods to ensure operational success in the next exercise,” he stated.

The pilot phase, he explained, involved the testing of the process with the registration and instant issuance of the Ghana Card to the President, Nana Addo Dankwa Akufo-Addo, on September 15, 2017.

The second phase involved the registration and card issuance to other prominent people, including former Presidents on Monday, June 4, 2018.

A pilot registration was subsequently carried out in some institutions and selected communities such as Adentan, La Nkwantanang and the Ga East municipalities in the Greater Accra Region.

According to Prof. Attafuah, there had been significant improvement in the exercise and so far, 547,768 Ghanaians had been registered and issued with the card.

Prof. Attafuah said the exercise would systematically be extended to the rest of the country on a regional basis. He stated that registration and issuance of cards in the Volta and Oti regions would commence on July 25 and end on August 1, 2019.

The Northern, Savannah and North East regions will have their turn from August 13 to September 2, 2019.

That of the Upper East and Upper West regions will begin from September 12 to 29, 2019.

The exercise will continue in the Bono, Bono East and Ahafo regions from October 10 to 30, 2019, while that of the Western and Western North regions will commence from November 11 to December 2, 2019.

The NIA projects that by the end of the exercise, about 85 per cent of Ghanaians aged 15 and above would have been registered and issued with smart, dual-interface Ghana cards.

After the national exercise, children under 15 will also be registered and issued with 2-D barcode Ghana cards.

The registration exercise is open to Ghanaians with genuine birth certificates, valid passports and certificates of acquired citizenship.

The Ghana Post Digital Address Code is also part of the requirements.

A person without any of these documents could be vouched for by a retired professional or a gazetted chief and others listed by the NIA.