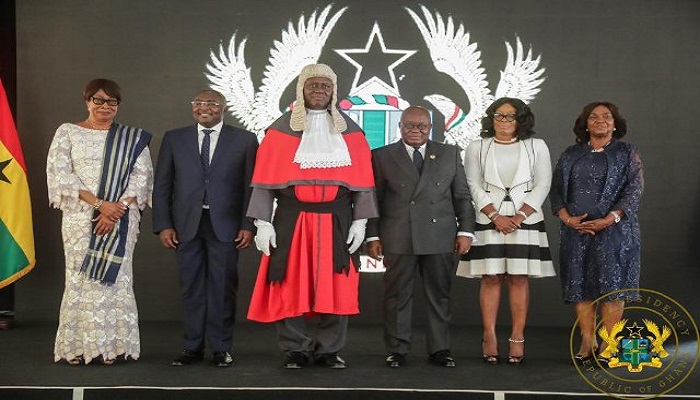 President Nana Addo Dankwa Akufo-Addo yesterday swore in Mr Justice Kwasi Anin Yeboah as the 14th Chief Justice of the Republic of Ghana at an elaborate and impressive ceremony at the Jubilee House.

The President administered the Oath of Allegiance, the Judicial Oath and the Oath of Secrecy to Justice Anin Yeboah and presented him with the Instrument of Appointment before the invited guests, who included former Presidents Jerry John Rawlings and John Agyekum Kufuor.

The Vice-President, Dr Mahamudu Bawumia; the two former female Chief Justices, Justice Georgina Wood and Justice Sophia Akuffo; a former First Lady, Nana Konadu Agyeman Rawlings, members of the Council of State, heads of all the security agencies, members of the Diplomatic Corps, the crème de la crème of both the Bench and the Bar were among the guests.

A large number of Justice Anin Yeboah’s family members, including his wife and children, were also around to support him.

Speaking after fulfilling all the legalities, President Nana Akufo-Addo said he was swearing in Justice Anin Yeboah on Constitution Day, a day chosen as a public holiday to commemorate the virtues of constitutionalism which had enabled the country, in the Fourth Republic, to enjoy the benefits of the most prolonged period of stable and constitutional governance in its history.

He described as an “admirable gesture” the situation where the two predecessors of the new Chief Justice had lent their support to him when he appeared before the Appointments Committee of Parliament and expressed the hope that that same level of support would be given to the Chief Justice when he assumed the mantle of leadership.

The President said the unanimous by-partisan expression of support by Parliament for Justice Anin Yeboah’s nomination would engender greater confidence in his work.

He said the selection of Justice Anin Yeboah as Chief Justice “was not a difficult one to make, in view of his level of qualification and the number of years he has served with distinction at the Bench at the Superior Court of Judicature, totalling 17 years.”

He said the selection of Justice Anin Yeboah as Chairman of the FIFA Ethics Committee, among other positions in the affairs of the world football body, was an attestation of his integrity, “because these appointments occurred at a time when world football was undergoing its greatest ethical crisis in modern times.”

The President expressed the confidence that Justice Anin Yeboah would be an effective leader of the Judiciary, guard jealously its independence and bring honour to that arm of government.

“I expect decency, discipline, fairness, hard work, deep-seated respect for the rule of law and the continuing modernisation of judicial activities to be the hallmark of his era as Chief Justice,” he said.

“The Judiciary has the onerous responsibility of being the bulwark of the defence of the liberties and rights of our people, and it can only carry out that task well if it has unalloyed respect,” he added.

President Akufo-Addo reiterated his advice to members of the Judiciary to refrain from situations where judges gave judgements on the basis of decisions from the lower courts and cited them as law and also when judges cited no authority for their rulings and gave orders without reason.

He assured the new Chief Justice that he (the President) would be a reliable and trusted partner of the Judiciary, so that the Executive and the Judiciary could cooperate in the spirit of mutual respect to entrench good governance for the benefit of the people.

He also indicated his preparedness to help address the infrastructural challenges facing the Judiciary.

The President urged all Ghanaians to work together, with their different views and perspectives, to achieve the Ghana Project — a nation under God, a united Ghana governed under the rule of law and respect for individual liberties.

In his response, Justice Anin Yeboah thanked God for bringing him that far and commended the President for the confidence reposed in him, assuring him that he would abide by the oaths he had sworn before the people of Ghana.

He said during his vetting by Parliament, issues of integrity among the Judiciary and the continuing perception of corruption, delays in the justice delivery system, poor infrastructure of courts and residences of judicial officers, challenges surrounding legal education, among others, were of great concern to the representatives of the people.

Justice Anin Yeboah gave an assurance that he would guard the integrity of the Judiciary and take the necessary steps to ensure that solutions were found to the challenges.

He said he would seek the support of the President to find the financial resources for improved justice delivery.

He served as an Assistant State Attorney at the Attorney-General’s Office in Koforidua, where he was elected the Eastern Regional President of the Ghana Bar Association (GBA).

Justice Anin Yeboah was also the Chairman of the Appeals Committee of the Ghana Football Association from 2004 to 2008 and rose to become a member of the Adjudicatory Chamber of FIFA.