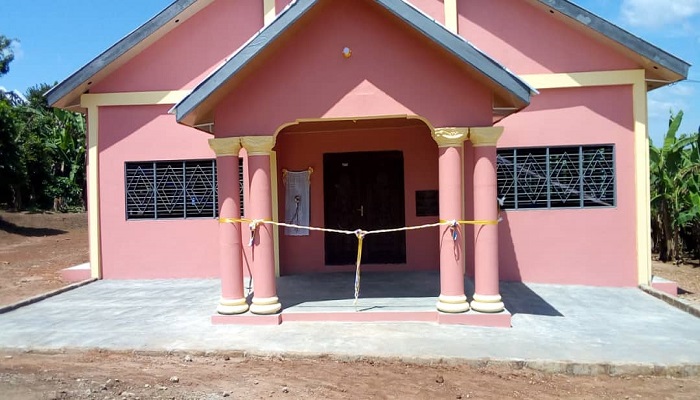 The Mprim Assembly Community Based Church Building (CBCB) in Adiemra District of Mampong Area of The Church of Pentecost has been completed and dedicated to the glory of God.

The building project which started in 1992, was dedicated on November 8, 2019, by the Area Head, Prophet Foster Kwasi Aniakwaa. A total of GH¢80,694.70 was expended on the project.

Delivering the sermon titled, “Pillar and Caterpillar,” Pastor Clement Asare of Adiemra District spoke extensively on the need for Christians to live exemplary lives to win more souls for Christ.

Using the new church building as an example, he stressed the importance of pillars in supporting the physical structure to save it from collapse. Pillars, he said, give shape to structures and also serve as landmarks for identity and ownership.

Similarly, he said, Christians are to support one another in the kingdom business, be constantly aware that their attitude either builds or negatively affect the image of the church universal. “We are the identity for the church in a degenerating world. Christians must therefore rise and shine in this dark world,” he added.

Pastor Asare indicated that certain character traits such as rebellion against church leadership, ungodly counsel, refusal to give financially in support of the kingdom work and backsliding portray such Christians as caterpillars in the house of God.

“In the mining industry, caterpillars are earth moving machines causing damage to the earth. So do Christians who become caterpillars cause havoc to the church. They stall the growth and development of fellow believers impeding the progress of the church,” he revealed.

He concluded by calling on believers to allow themselves to be fully possessed by the Holy Spirit.