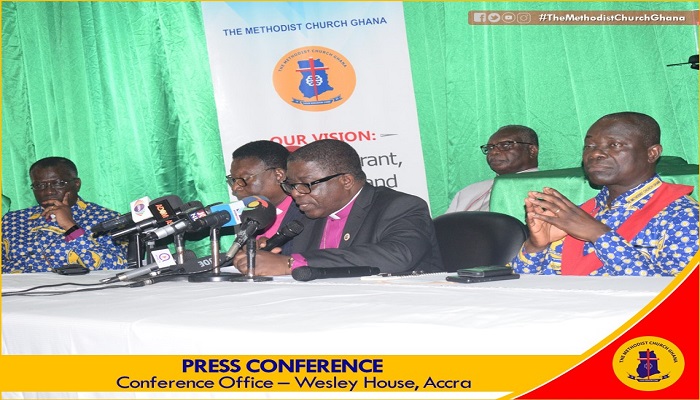 The Methodist Church of Ghana has disassociated itself from a recent decision by its British counterparts to embrace same-sex marriages.

Speaking at a press conference, Presiding Bishop, Most Rev. Dr Paul Boafo, said the Church in Ghana is independent of the British and not bound by the decision taken at a conference in Birmingham.

“I want to state with some emphasis and also do so in no ambiguous terms that the Methodist Church Ghana is an autonomous conference with its own leadership.

“We have been independent of the British Methodist conference since 1961, however, historically, we have maintained the working relationship with the British Conference as the mother church that gave birth to the Methodist church Ghana,” he added.

Most Rev. Dr Boafo noted it is for this reason that the leadership of the Methodist Church Ghana and that of the British participate in each other’s conferences and activities.

This heritage is shared with the Methodist Churches in other parts of West Africa including, Nigeria, Sierra Leone, the Gambia, Republic of Benin and several others.

This historical relationship notwithstanding, being autonomous, the Methodist Church Ghana is not bound by the decisions of the British nor any other conference anywhere, the Bishop stressed.

He added: “We are very aware of our Wesleyan heritage and what it entails and as an autonomous conference, we resolve to defend tenaciously the Biblical faith that was once delivered unto the saints especially as it affects, all areas of human life and our relationship with God in Christ Jesus.

“This we shall continue to do in the power of the Holy Spirit.”

Most Rev. Dr Boafo said Ghana will not be pressured under the guise of receiving more aid or funds to give in to modern lifestyles that overthrow the country’s cultural values and principles as a nation.

In Ghana, a law against ‘unnatural carnal knowledge’ makes sex between two males a criminal offence.

Most Rev. Dr Boafo said the Methodist Church Ghana’s detestation of same-sex marriage and its related issues have not changed and the decision by the British Conference will have no effect on that.

African Methodists, especially those with historical links to the British Conference, he noted, upon hearing of the resolution, were disturbed’

“Some were even confused about the decision and this decision as I have mentioned, sought to go beyond recognition and acknowledgement to regularise same-sex, cohabitation, same-sex marriages and divorce within the church.

“We were all saddened by the decision and there are good reasons for our feelings. This decision would amount to the reversal of the long-standing Christian believes in marriage and sexuality and the normalization of moral behaviour that the Christian church has historically rejected as contradictory to God’s word.”

He said the responses on social media following the resolution ranged from shock to consternation and anger with some asking the Methodist Church Ghana to act.

Dr Boafo urged the public to disregard all allusions to the fact that this has to do with the wider Methodist family.

“That decision does not affect the Methodist Church Ghana’s doctrinal position on sexuality or any other issues for that matter,” he indicated.

Implications for members in the UK

The many Ghanaians living in the United Kingdom who worship in British Methodist Churches and the pastors who serve under the British Conference with permission will be given directives on how to carry on with their church and personal Christian activities in view of this decision, Dr Boafo said.

He disclosed that a decision will be taken at an upcoming Expanded General Purposes Council Meeting in August.