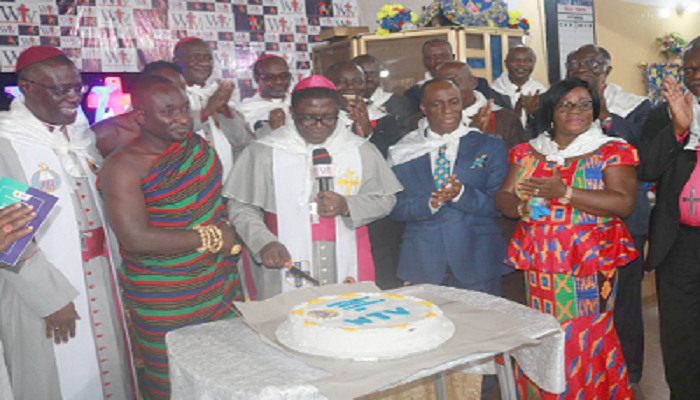 The Methodist Church Ghana has inaugurated a nationwide television channel, Wesleyan Television (WTV), with a tag line ‘Reaching out to the World’.

The TV station seeks to bring people to the saving knowledge and influence of Christ Jesus through quality Christian-centered television programmes.

The leadership of the church inaugurated the station with the maiden telecast being shown at the Wesley Chapel in Old Tafo in Kumasi over the weekend.

The Presiding Bishop of the Methodist Church Ghana, Most Reverend Dr. Paul K. Boafo said the time was right for the Church to have a stronger and wider pulpit through the channel to help save the people from being misinformed by supposed men of God.

He explained that the new station “will appeal to the needs of all people and businesses underpinned by the rich Wesleyan evangelical values of the Methodist movement”.

Most Rev. Boafo, who doubles as the Chairman of the WTV Steering Committee, however, noted that the station was opened for business to the general public.

“But we must at all times bear in mind the guiding principles of the station: Christ-centeredness, credibility and relevance,” he said.

On behalf of the Methodist Church Ghana, he commended Mr. Stephen Boateng, the Chief Executive Officer of the KESSBEN Group of Companies, and some members of the church for their roles in the setting up of the TV station.

The Tafohene, Nana Agyen Frimpong, represented by his son, commended the Methodist Church Ghana for the onset of the TV station, which he said would help shape the thoughts and aspirations of discerning viewers and transform them into responsible and God-fearing citizens.

Shieik Burhanu Deen Baba, the Assistant Secretary, Council of Ulamau and Imams, on behalf of the Ashanti Regional Chief Imam, Abdul Mumin Harun, hailed the Methodist Church Ghana for the initiative, saying the station had come at a time that many people were living wayward lives and needed spiritual guidance.