‘Marching For Jesus Christ’ Hits The Streets Of Enfield 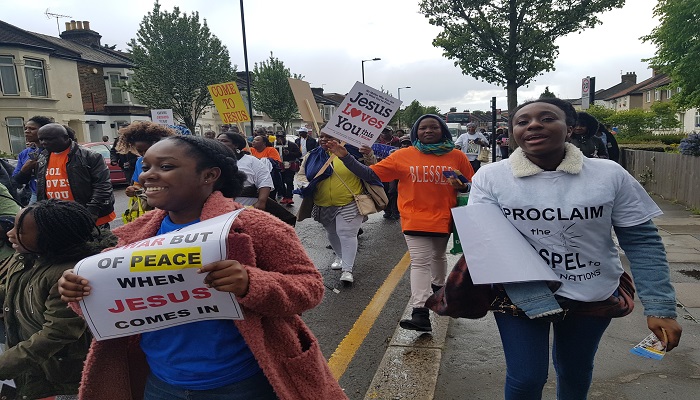 ‘Marching For Jesus Christ’ Hits The Streets Of Enfield

Members of the London North Area of The Church of Pentecost-UK joyously marched down the streets of Enfield to possess the city for Jesus Christ by proclaiming the risen Christ as the Lord of all.

The presence of the Lord was mightily felt throughout the march which took place on May 4, 2019.

The event was organised by the Archway Pentecost International Worship Centre (PIWC) District, with their Resident Minister, Pastor Charles Teddy Adupong, leading the group. Other members of the Church from Tottenham District, Fountain Gate PIWC District and Dagenham District, participated in the event in their large numbers. They were led by their District Ministers, namely Pastors Michael Tedeku and Delmar Asorwoe, who is also the Area Evangelism Leader.

Participants came with high hopes and prepared hearts. Interspersed with percussion and singing to charge the atmosphere, the jubilant members walked down the streets wearing customised T-shirts with messages of hope and life. They were greeted with smiles and amused locals who peered through their windows to catch a glimpse of them. Gospel tracts were distributed to the residents during the march.

Though the hailstorms razed down heavily when the soldiers of the cross reached Hertford Road at about 1:00pm, they were not discouraged, describing it as a blessing from heaven. The euphoria at this point was indescribable as the army of God marched on and finally encamped at the Albany Park, close to Ark John Keats and broke bread in fellowship. Their hearts were filled with joy with the assurance that the Lord will water the seed planted in the hearts of the residents through the march.

Indeed, God is raising an army to possess nations and surely the UK will not be left out.