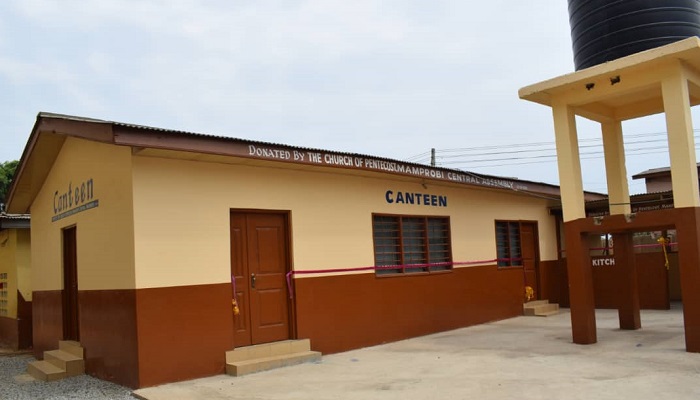 The Mamprobi Central Assembly in the Dansoman Area of The Church of Pentecost, led by Pastor Opuni Boateng, has constructed a modern canteen for Nii Kojo Ababio Cluster of Schools, near Tuesday Market in Mamprobi, Accra.

The dedication and handing over of the facility took place on January 31, 2019. The Church was represented by the Dansoman Area Secretary, Pastor Johnny Peprah, who sat in for the Area Head.

The construction of the facility has come as a relief for the pupils in the school who hitherto sat under a makeshift shed and a tree to take their meals during break. The situation usually become very worrying during wet seasons, making the place virtually unusable.

The facility which contains a kitchen and a washing bay, cost the church a total amount of GH¢53, 000.00. The project was wholly funded by the Presiding Elder, Elder Eric Addai and his wife Margaret.

The gesture of the local assembly was conceived when the leadership of the Church requested the school authorities to be given a place to worship temporarily. This was to help the local assembly pull down the old church building that had some defects to give way for the construction of a new auditorium.

In an interview with the Deputy Director, Supervising and Monitoring of Accra Metro Directorate of Education, Mrs. Leticia Gar, who used to be the Circuit Supervisor and played a key role in the implementation of the project, expressed her profound gratitude to the Church for the wonderful gesture.

On his part, Elder Eric and Mrs. Margaret Addai thanked the school authorities for opening their doors to the Church to have a place of worship when they needed it so much.

The Headmistresses of the schools shared their joy and appreciation to the Church for the canteen. They asked the church not to only think of the physical need of the pupils, but to find a way to win them for Christ by preaching the Gospel to them.