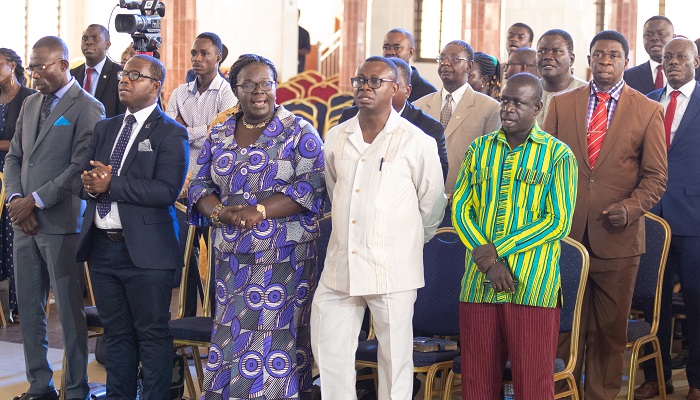 The maiden orientation seminar for Board and Committee members of The Church of Pentecost was organised on Thursday, June 4, 2019, at the Sophia McKeown Temple, La in Accra.

The event, which was attended by all newly appointed and existing Board and Committee members of the Church, was convened by the Chairman of The Church of Pentecost, Apostle Eric Nyamekye. Present at the event were the immediate-past Chairman, Apostle Professor Opoku Onyinah (Retired), the General Secretary, Apostle Alexander Nana Yaw Kumi-Larbi, the International Missions Director (IMD), Apostle Emmanuel Gyesi Addo and some Executive Council Members, among others.

Addressing the participants, Apostle Eric Nyamekye underscored the instrumental role of the various Boards and Committees in the pursuit of the Church’s “Possessing the Nations” agenda (Vision 2023)

In view of this, he said that, in the next five years, the Church would focus on strengthening and re-aligning its existing institutions and structures to drive the successful implementation of Vision 2023.

He, therefore, noted that the orientation was being held to help Board and Committee members know the expectations of the Executive Council (the appointing authority) on their appointments within the framework of Vision 2023.

Apostle Eric Nyamekye also advised Board and Committee members of the Church to always bear in mind that they have received their appointments on account of the grace of God. He, therefore, urged them to demonstrate the highest standards in the discharge of their mandate so as to validate the honour done them by the Lord.

“Don’t become a pressure group. This would not be helpful. Otherwise, instead of the Boards and committees serving as a catalyst for growth, they would rather become a hindrance,” he said.

As part of the training programme, the General Secretary took participants through the roles and responsibilities of Boards and Committees in the context of The Church of Pentecost.

The Finance and Administrative Director (FAD), Pastor Dr. Nicholas Darko, also took them through some issues of concern such as conflict of interest, unethical practices, and recapitalization, among others.

The Chairman, Apostle Eric Nyamekye ended the meeting by quoting John 13:17 to encourage participants to apply all that they have received during the seminar.