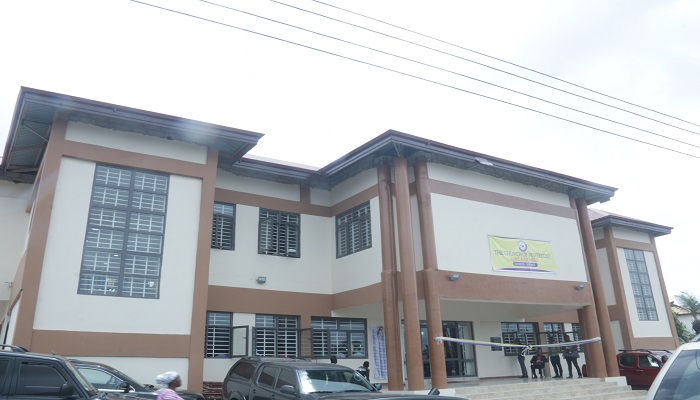 The General Secretary of The Church of Pentecost, Apostle Alexander Nana Yaw Kumi-Larbi, on Friday, August 16, 2019, dedicated a one-storey church building complex for the Love Assembly in the Odorkor District of the Church.

The edifice which cost a total of GH¢827,450.00 to construct has offices and other facilities. Assisting the General Secretary to dedicate the auditorium were Apostle Patrick Aseyoro (Odorkor Area Head), Elder Prof. Stephen Owusu-Kwankye (Finance Board Chairman of the Church) and the outgoing Odorkor District Minister, Pastor Victor Asante Darko, among others.

Love Assembly was split from EPMT Assembly in 2008 with a total membership of 145 during the time of Pastor Dan Nyanpong Asihene as district minister. The split became necessary following the ever-growing numbers of the EPMT Assembly with limited space to contain the congregation at one service. Currently, the assembly can boast of over 240 adult members with 22 presbytery members made up of eight elders, eight deaconesses and six deacons.

The land on which the auditorium is built was released to the assembly in 2012 when Prophet James Osei Amaniampong was the Area Head.

Delivering the sermon at the service on the topic, “Using Unity in Diversity to Build the Family, the Church and the Nation,” the General Secretary, Apostle Kumi-Larbi, said that God created everyone with unique skills and talents.

According to him, God by His own wisdom also created diverse languages and ethnic groups and placed them together. He indicated that despite the diversity in tribes and political differences, God expects Ghanaians to unite and stay together peacefully as one people in order to build a happy home, a peaceful society and a prosperous country.

Reading from 1 Corinthians 3:9-23, Matthew 16:18 and Ephesians 2:13-22, Apostle Kumi-Larbi indicated that since God created all persons with unique skills, no one is useless in the house of God.

The General Secretary noted that God has called Christians to equip them to do His work (1 Peter 2:5). “As a believer, you are a useful material whom God can use to build His church. Everyone has a unique role to play at every stage of the church building process because God has endowed us with special graces which makes us so unique,” he added.

He stated that when one becomes a Christian, God adds graces to the innate skills to sharpen their talents, saying, “We as Christians have talents and special gifts which make us so special.”

Apostle Kumi-Larbi called on Ghanaians, especially politicians to unite in their diversity and stop the politics of animosity in order to build a united country since there is power in unity. “Let’s use our unity in diversity to build the family, the church, society and the nation,” he stressed.