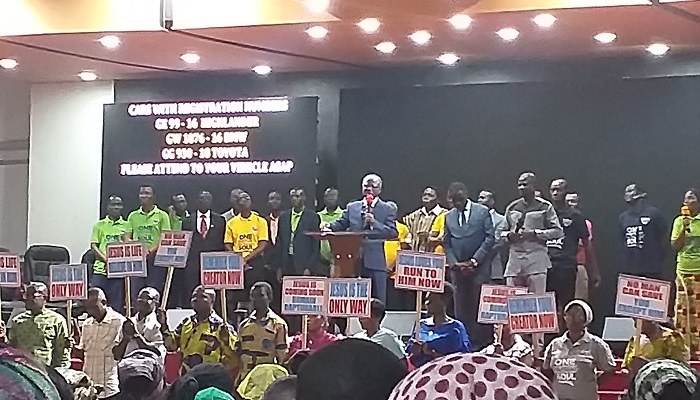 The Dome of the Pentecost International Worship Centre, Kokomlemle (PIWC-Kokomlemle) was filled to capacity as members of the La Area arrived in their numbers to witness the launch of the Area’s “One Member One Discipled Soul” project.

The launch, which took place on Tuesday, October 29, 2019, was organized under the auspices of the La Area Head, Apostle John Osei Amaniampong.

Delivering a sermon on the topic, “Evangelism! The Major Task of the Church,” based on Mark 1:17, the Maamobi District Pastor, Evangelist Maxwell A. Asiamah indicated that spreading the gospel and discipling others to do same was the core of Jesus’ ministry on earth.

“Jesus knew he alone could not do the work of evangelism and He also knew that He would not be on earth forever, so He trained others and entrusted them with the task of preaching the gospel and making disciples of all nations,” he reiterated.

Evangelist Asiamah noted that there are two main types of evangelism, namely Mass and Personal evangelism.

“Personal evangelism is where an individual consciously decides that he or she will lead another soul to Christ and mentor such a fellow to remain strong and firm in the faith,” he explained. (John 10:11; Romans 5: 6, and 1 Corinthians 15:1).

He also added that every Christian is an evangelist. “Andrew witnessed to Peter and brought him to Christ, and Peter, in turn, evangelized to multitudes and brought them to Christ. Be it personal or mass, evangelism is dear to God’s heart,” he stressed.

He further expounded that God desires that every believer becomes a soul winner, however, most believers find excuses not to preach the gospel of Jesus Christ. He bemoaned that the unwillingness of believers to spread the gospel leads to many souls perishing without coming to the saving knowledge of Jesus Christ.

“When the woman at the well encountered Jesus, she did not keep the good news, but she became a great evangelist and spread the word to all of Samaria and its environs,” he revealed.

After the sermon, Apostle John Osei Amaniampong proceeded to launch the “One Member One Discipled Soul” project to the glory of God.