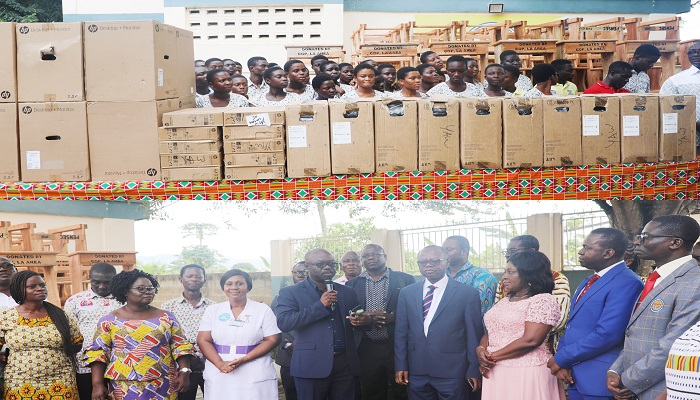 The La Area of The Church of Pentecost, led by Apostle John Osei Amaniampong, has donated 103 mono desks and 20 desktop computers to the Pentecost Senior High School (PENSEC) at Koforidua.

Ten of the computers were procured by Elder Dr. Samuel Amo Tobbin, Executive Chairman of Tobinco Group of Companies.

Presenting the items to the school on Friday, October 25, 2019, Apostle John Osei Amaniampong stressed the need for the Church to support the school to become one of the best in the country.

According to the La Area Head, the Church can possess the nations through education, hence the donation to the school.

He commended Elder Dr. Samuel Amo Tobbin for partnering with the Area to equip the school’s ICT centre.

The La Area Chairman of the Pentecost Social Services (PENTSOS), Pastor George Ankomah, noted that the computers will go a long way to train the students to drive the technological agenda of the world and of God. He was hopeful that the items will be put to good use in order to benefit the students.

The New Juaben South Municipal Director of Education, Mrs. Mavis Oparebea Yirenkyi, commended the Church for the donation and noted that it will enhance teaching and learning in the school and improve the performance of the students.

She indicated that PENSEC-Koforidua has a very bright future as the students are eager to learn coupled with the continued support from the Church.

The Municipal Education Director stated that the government is currently constructing a 3-storey 15-unit classroom block to augment infrastructure in the school.

The Headmaster, Mr Peter Atta Gyamfi, was full of appreciation to the La Area and Elder Amo Tobbin for the gesture. He said that the donation was timely because of the ever-increasing students’ enrolment which has put some stress on their limited facilities.

He paid glowing tribute to the Teshie-Nungua Area of the Church which also donated 400 mono-desks to the school a year ago at the cost of GH¢56,000.00 in addition to the provision of two mechanized boreholes in the school at the cost of GH¢36,000.00. He added that the Koforidua Area of the Church also donated a set of dining hall benches and tables.

“At the moment the General Headquarters of the Church is also putting up a 2-storey boys dormitory block. We are grateful to the leadership of the Church for the support. However, we want to appeal to other Areas to also come to our aid. The school was established by the Church, so the Church has a role to play to equip it,” he said.

He called for the replacement of their only bus which has now been grounded due to its poor condition.

Despite the challenges, the headmaster said that God has been so gracious to PENSEC as it continues to chalk many successes. He indicated that when the government absorbed the school into the public system in 2015, the school’s population was then 155, but currently, enrolment has increased to 1,915.

He added that the Ghana Education Service has moved the school from Category D to A, making it one of the top schools in the country following its sterling academic achievements in recent times.

He disclosed that out of the 731 candidates who wrote the 2019 West African Senior School Certificate Examination (WASSCE), 546 passed in all subjects, representing 74.79%. He revealed that some of the subjects such as Physics, Chemistry, Business Management, Economics and ICT (Elective) recorded a 100% pass.

Present at the presentation ceremony were some ministers from both La and Koforidua Areas, management of the school and the Koforidua Area PENTSOS Chairperson, Deaconess Philomena Mireku.