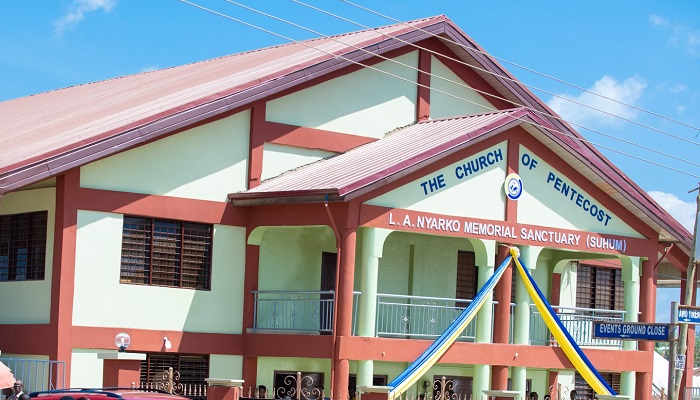 It was a day of celebration and emotions as members of the Suhum Central Assembly of The Church of Pentecost (COP) witnessed the dedication of their church auditorium on Sunday, November 24, 2019.

The building, named L.A. Nyarko Memorial Sanctuary, was dedicated by the General Secretary of the church, Apostle Alexander Nana Yaw Kumi-Larbi at a glorious ceremony which could have easily passed for a homecoming service.

The event saw the reunion of current and past ministers and officers of the assembly and the Suhum Area including Apostle A.E.K. Akuban (Area Head), Apostle Mike Etrue (immediate-past Suhum Area Head and current Kaneshie Area Head) and Pastor Norman Appiah-Danquah (District Minister)

The construction of the edifice was initiated in 2004 during the tenure Apostle Barabu (Rtd.) as Suhum Area Head and Pastor John Ofei Badu as District Minister when the former place of worship developed structural defects. Three years later, the foundation stone for the building was laid by the then Area Head, Apostle B.T. Kofie during the tenure of Pastor I. A. Babae as District Minister.

Apostles Blessed Bonney and Mike Etrue, both past Area Heads, together with Pastors E.G. Mantey and S.B. Paintsil, (past District Ministers) also supervised the project at various stages of construction until its successful completion under the tenure of the current Area Head and District Minister at a total cost of GHS 676,657.07.

The church auditorium has been named after Evangelist L.A. Nyarko (of blessed memory), the first Suhum Area Head, in recognition of his meritorious service that resulted in the exponential growth of the church in the area.

In view of this, the Nyarko family led by Apostle Lawrence Otu Nyarko (son of Evangelist Nyarko and Kade Area Head), who were present at the service, donated a plaque bearing the profile of their late father to the Suhum Area to be mounted on the wall of the church auditorium for the benefit of posterity.

Speaking on the topic: “That There May Be Glory In The Church” drawn from the 2020 theme of The Church of Pentecost, “A Glorious Church To Possess The Nations,” the General Secretary, Apostle Kumi-Larbi, urged members to guard the glory in the church by living holy lives.

Reading from Ezekiel 8:5-11, he cautioned that the glory of God could be pushed out of the church when members do not uphold righteousness and indulge in practices detestable to God.

He pointed out that it is the glory of God in the Christian that attracts unbelievers to reach out to also reach out to Jesus Christ. He, therefore, urged members of the church, in particular, and Christians, in general, not to be what he describes as “part-time or Sunday Christians”, but to live out their Christian principles and values wherever they find themselves.

He also advised Church Elders to continue to build themselves up in the Lord so that they would become “weighty” and be empowered to meet the spiritual needs of members of the Church.

Pastor Norman Appiah-Danquah, on behalf of the district, expressed gratitude to persons both home and abroad, who contributed to the successful completion of the building project. Among them were the General Secretary and his wife, Mrs. Rose Dansoa Kumi-Larbi, who aside their financial contributions, also donated 20 chairs for the platform.