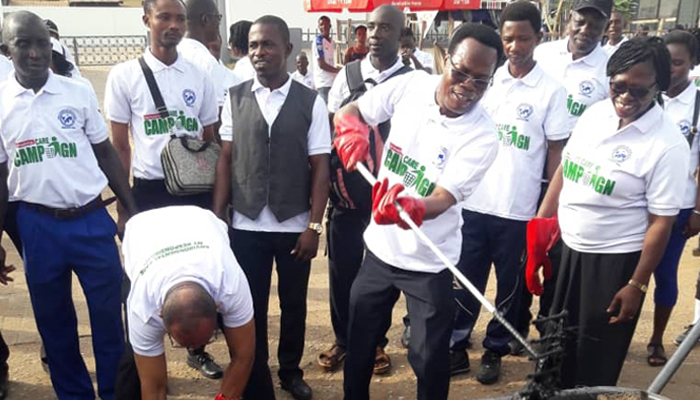 The Konongo Area of The Church of Pentecost has launched the ‘Environmental Care Campaign’ in line with the 5-year strategic plan of the Church to possess and transform the nations.

The launch, held at the Konongo Central church auditorium on 23rd February, 2019, was on the theme, “The Absence of Good Sanitation is Death.” It was chaired by the Area Head, Apostle Frederick Kwaku Andoh, and attended by the Member of Parliament (MP) for Asante Akim Central Constituency, Hon. Kwame Anyimadu Antwi, the clergy, among others.

Speaking at the event, Apostle Andoh said that the issue of sanitation is a godly and national one and should be devoid of politics. He stated: “The nation, in order to be transformed in the area of sanitation, must first transform the worldview of the Ghanaian concerning sanitation with the thought of God.”

He indicated that the campaign is a vision of the leadership of the Church. As such, the Church and other individuals must see the need to join hands in making the vision a reality.

In an address, the MP of Asante Akim Central, Hon. Anyimadu Antwi, pointed out that the Environmental Care Campaign of The Church of Pentecost is directly in line with President Akufo-Addo’s vision of ensuring that Ghana becomes the cleanest country in Africa.

The MP pledged government’s continuous support for the exercise and urged all to fully participate in every activity that would be organised towards achieving the Church’s vision.

The MP subsequently donated items such as brooms, wheelbarrows, hand gloves and dustbins to the Church to facilitate the campaign.

The programme was climaxed with a massive clean-up exercise at the Konongo township.