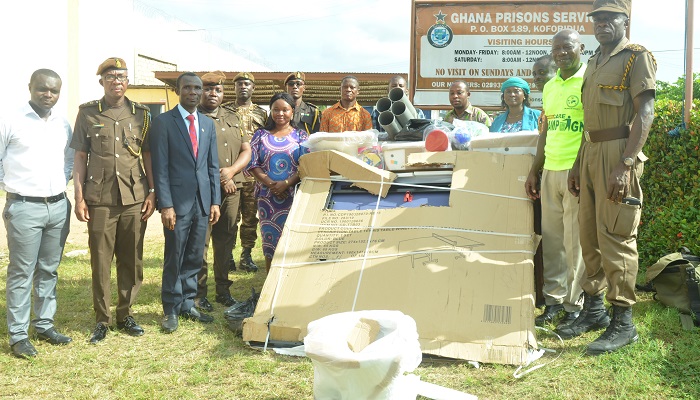 The Koforidua Effiduase District of The Church of Pentecost has donated items worth GH¢5,500 to the Koforidua Prisons Service.

The donation, which took place on Monday, November 25, 2019, under the leadership of the District Minister, Pastor Emmanuel Osei Agyapong, was done in line with the 5-year vision of the church to transform every sphere of society with the values and principles of the Kingdom of God.

They presented the items on behalf of the District and thanked the Lord for the opportunity to be able to give to bless others.

According to the Pastor Agyapong, the District was moved to support the service after the visit of ADP Joseph Asabre (Second˗in˗Command, Koforidua Prisons Service) to the District to educate the members on issues of national interest.

Delivering a sermon on the topic, “Your Father is Still Waiting for You,” based on Luke 15:11, Pastor Agyapong drew lessons from the story of the prodigal son.

“When he came unto himself he went back to the father who was earnestly waiting for him. Like the Prodigal’s son, although we do not deserve the love of God, He loves us unconditionally,” he explained.

Pastor Agyapong encouraged the inmates not to lose hope but to walk in the knowledge that God loves them unconditionally.

ADP Joseph Asabre, who received the items on behalf of the service, expressed his heartfelt gratitude to The Church of Pentecost for the kind gesture and assured that the items would be used for the intended purposes. He further encouraged other institutions to follow the example set by the church.