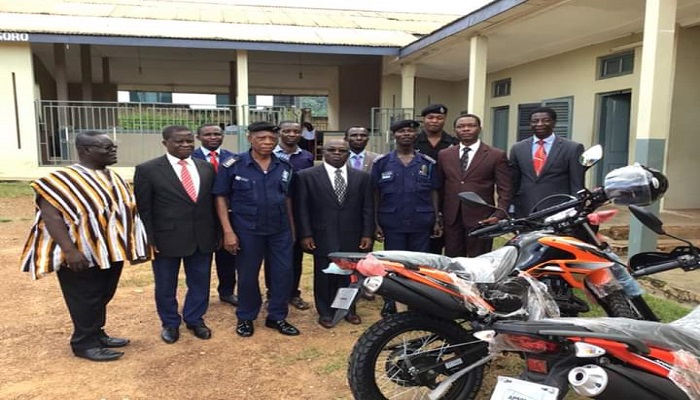 The Koforidua Effiduase Area of The Church of Pentecost has donated two motorbikes to the Begoro District Police Command in the Fanteakwa North District of the Eastern Region.

The gesture which took place on Thursday, October 17, 2019, was part of the Church’s corporate social responsibility towards the Ghana Police in line with Vision 2023 of ‘Possessing the Nations.’

In a short address, the Area Head, Apostle Daniel Yeboah Nsaful, said: “The gesture is to help the Police Patrol Team stationed at Abuorso to effectively patrol the Abuorso-Dedesawirako road which has become a notorious spot for highway robbery attacks in the Fanteakwa North District.”

He cited an instance where a minister of the Church was attacked by highway robbers on the same stretch of the road early this year.

The Station Master of Begoro Police Station, Chief Inspector E. K. Ekudzeto, who received the motorbikes on behalf of the Fanteakwa North District Police Commander, thanked the Church for the kind gesture and promised that the bikes will be put to judicious use and for the intended purpose.

The presentation of the motorbikes coincided with the Area Ministers and Wives’ Crusade which was organized at Begoro from October 15 to 17, 2019 under the theme, “This same Jesus” (Acts 1:11). A total 86 souls were won for the Lord.

Present to assist the Area Head to donate the motorbikes were the Area Executive Committee Members and some senior ministers in the Area.