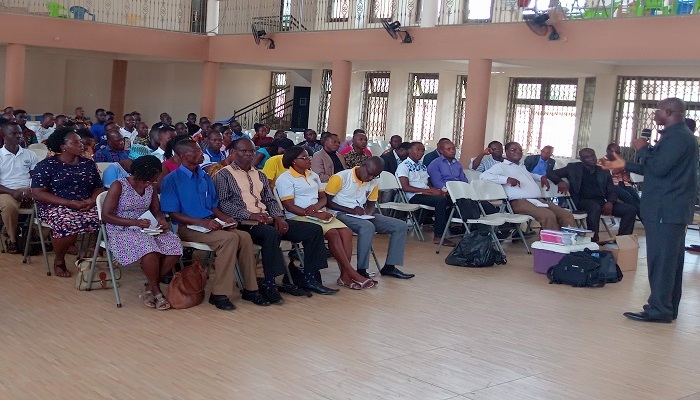 The Koforidua Area of The Church of Pentecost has organized a day’s seminar on Stratified Evangelism for District Evangelism Coordinating Teams in the Area.

The seminar which was held on Saturday, May 17, 2019, at the Koforidua Central Tabernacle, brought together District Evangelism Coordinating teams as well as other members of the Area and to be trained on effective ways of reaching out to the unsaved people groups in the society.

Addressing the participants on behalf of the Area Head, Apostle Samuel Osei Asante, the Area Secretary, Pastor Paul Laryea, hinted that organizing training programmes for leaders at various levels is a very important aspect of possessing the nations.

He, therefore, encouraged all participants to fully partake in the program and put has been learnt to practice afterwards.
The facilitator for the seminar, Mr. Bernard Sakyi, Team Leader for African Enterprise, spoke on the topic, “Stratified Evangelism, Principles, Preparations and Best Practices”.

In his presentation, Mr. Sakyi stressed that Evangelism is the heartbeat of God and the main goal of every believer is to make it to heaven. However, as they (believers) anticipate the return of Jesus Christ, they must preoccupy themselves with the responsibility of becoming vessels through which others would be saved.

According to him, Stratified Evangelism, in simple terms, refers to the process of reaching out to people, wherever they are, in their natural surroundings such as homes, workplaces, schools, hospitals etc.

“In other words, Stratified Evangelism is a united effort of preaching the Gospel in a given community to specific people at a specific time. This makes it easier for the person being ministered to relate to the message being preached in his or her ‘context,’” he said.

He noted that Stratified Evangelism encourages every member of the church to get involved in the soul winning process. This, he said, helps the Church to focus on specific target groups in society to win them for Christ. It is cost effective and requires committed Christians to engage in.

Mr. Sakyi further stated that Stratified Evangelism could be done through the four “Ps” principle, which he outlined as “Prayer, Preparation, Proclamation and Preservation.” He, therefore, stressed the need for Christians in general and Christian leaders, in particular, to pay closer attention to the last “P” (Preservation). “Follow-up and intentional discipleship should be deepened,” he added.

Touching on the five steps in Stratified Evangelism, Mr. Bernard Sakyi noted that: “The first step is to LOOK AROUND. You need to look around to see whether you will find one or two people who do not know Jesus. Secondly, LOOK UP; that is, lift up the people you spot before God in prayer. Thirdly, LOOK OUT for an opportunity to invite them to your Church. Fourthly, LOOK FORWARD; expect the person and prepare to receive him or her in a welcoming way. Finally, LOOK AFTER the person by undertaking intentional follow-up on the person to ensure that he or she is firmly established.”

Concluding his presentation, Mr. Sakyi challenged churches to refrain from the “spider style” of evangelism and focus on the “fisherman style” of evangelism. He explained that the spider always waits for its prey to fall into its web or trap, but the fisherman goes out to catch its prey (fish).

“The Church should from time to time go out to preach the gospel for the salvation people,” he emphasized.

He also encouraged Christians to make maximum use of every opportunity to present the gospel of Jesus Christ to any unbeliever whom God brings their way. He also advised them to always share personal testimonies of their conversion and salvation to their hearers to affirm the power of God to transforms lives.

Present at the seminar were the Koforidua Area Pastorate.