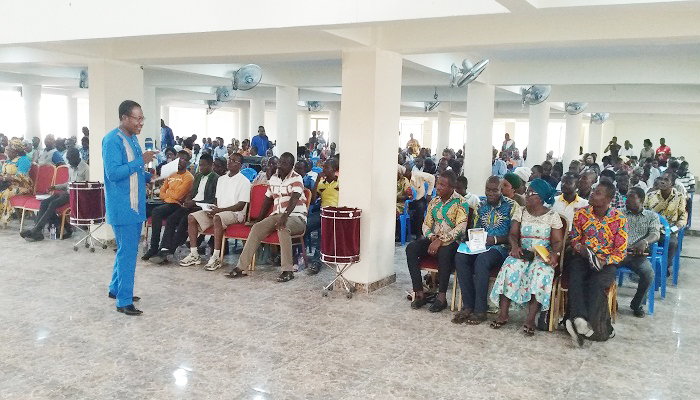 Over 400 leaders made up of ministers and their wives, presiding elders and other leaders in the Kaneshie Area of The Church of Pentecost have been taken through a day’s seminar to equip them to handle discipleship in their respective local assemblies and districts.

In a presentation on the topic, “Developing Disciple Making Leader,” Apostle Isaac Tetteh Juddah encouraged the participants to intentionally and consciously disciple members who will in turn disciple others. He noted that the future of the church depends largely on how current leaders disciple and train the younger generation.

“If we are going to possess the nations for Christ, it is important that we actively, consciously and intentionally mentor members to be Disciples of Christ wherever they find themselves. The church has a great pool of young people, let us, as leaders mentor them to affect their worldview and take over the leadership of the church in the coming years,” he noted.

Using his life experience to buttress his point, Apostle Tetteh Juddah said that he was mentored and trained by some elders in his local assembly who saw potentials in him. This, he explained, has contributed immensely to his Christian life.

In a different presentation on the topic, “Organising New Members Class in The Church of Pentecost,” Apostle Tetteh Juddah admonished ministers and presiding elders to train ushers and officers on the best ways to receive visitors during church services. He stated that if visitors or new members are well received, they will feel at home and enjoy the service.

Apostle Tetteh Juddah explained that the New Members Class is purposely for Christians from other denominations who join the Church.

Touching on other members of the Church who relocate to other districts, he stated that “they shall be given the option to join the New Members Class if they prefer to do so after going through the initial introduction and general orientation about the local assembly they intend to worship with.

Apostle Mike Etrue also shared some insights on how he was warmly received and welcomed when he once visited a different church even though he did not disclose that he was a pastor. He noted that if The Church of Pentecost is able to adopt this style, many visitors who visit the local assemblies will be maintained in the church.

A workshop was also held during the seminar.