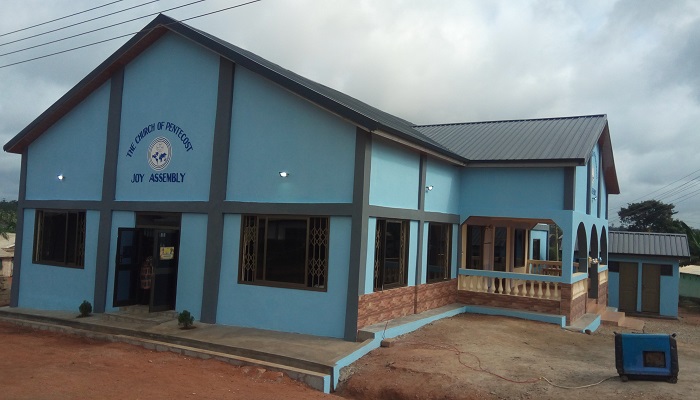 The Wawase Joy Assembly in the Agona Swedru Area of The Church of Pentecost has dedicated its church building to the glory of God.

The dedication ceremony, which took place on Wednesday, August 21, 2019, was officiated by the Agona Swedru Area Head, Prophet David Kwesi Kankam Beditor, who doubles as an Executive Council Member of the church. He was assisted by the Wawase District Minister, Pastor Emmanuel K. Appiah.

The building which was constructed at a total cost of GH₵172,274.90, was financed through the assembly’s Local Development Fund (LDF), Head Office and Area grants, and donations from individuals such as, Elder Prince Chris Andoh and Mr. and Mrs. Dangbe who contributed various sums of money to the successful completion of the building.

The Wawase Assembly began on September 13, 1992, in a classroom at the Swedru District, with Pastor Isaac Anane Babae as the District Minister. In 2002, a parcel of land was acquired for the construction of a church building for the assembly and on September 6, 2017, the foundation stone was laid by Prophet David Kwesi Kankam Beditor with assistance from Pastor E.K. Appiah.

Speaking at the dedication ceremony on the topic “The Christian and Extra Oil,” based on Matthew 25:1-13 and John 14:26, Prophet David Kankam advised the congregation to endeavour to have extra oil in their lamps as they embark on their Christian journey.

He explained that the oil in the Parable of the Ten Virgins represents the Holy Spirit. He, therefore, advised that Christians constantly yearn for the in-filling of the Holy Spirit, in order not to fall short in any spiritual gifting and as a result, miss the glory of God.

“The Holy Spirit is our ultimate helper, therefore, every believer needs the Holy Spirit to function and grow in the Christian faith,” he said.

Drawing lessons from the Parable of the Ten Virgins, Prophet Kankam indicated that all ten virgins had equal abilities and qualities, however, the ‘foolish’ virgins lacked extra oil, which comes from constant fellowship with the Holy Spirit.

He, therefore, encouraged the congregation to yearn for the constant fellowship of the Holy Spirit.