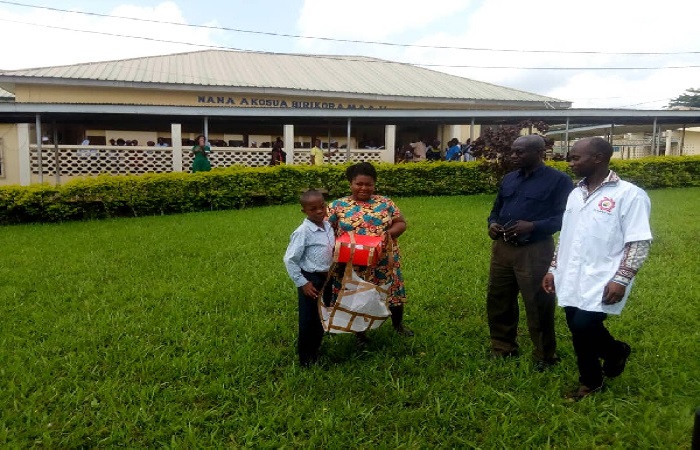 “I am so happy; I am grateful to Zipline and Novartis.”

Those were the words of an 11-year-old sickle cell patient, Ohene Kwaku, as a Zipline Medical drone delivered his medication to him at the Asamankese Government Hospital in the Eastern Region on Wednesday, June 19, 2019.

Not only was little Kwaku excited, but the entire Hospital was electrified as the drone dropped the Hydroxyurea Capsules in the garden of the health facility at about 10:49am.

It was the first time in the history of the Hospital and indeed the entire country that a sickle cell drug has had to be delivered to a patient via drone technology.

Nurses, doctors, and some patients came out in their numbers with excitements as they watched the drone flew over the facility three times and eventually delivered the medication.

Kwaku’s mother, Ellen Ofori, has over the last eight years had to transport him from Akwatia No. 4 to the Korle Bu Teaching Hospital for treatment.

But the future looks bright for Kwaku and many other Sickle Cell patients in the Eastern Region, as Novartis, Zipline and the Sickle Cell Foundation step up efforts to deliver medications to the doorstep of every patient.

General Manager of Zipline Technologies Ghana Limited, Daniel Marfo, told journalists at Omenako before the take-off of the drone that efforts were being made by Zipline and its partners to identify clinics in the region where sickle cell patients could visit to pick up their drugs to be delivered by drones.

The medications, he said, could be delivered on a weekly basis.

Madam Ofori is hopeful that the move would help ease the financial burdens of Kwaku and other patients as well as bring an end to travelling long distances to receive treatment.

Little Kwaku was diagnosed with the Sickle Cell disease at the age of three and have had to be transported to Korle Bu over the last eight years for treatment.

After receiving the medication, Madam Ofori observed that she had over the period transported Kwaku four times each year, something she bemoaned as a huge burden.

She was thankful to Novartis and Zipline Ghana Limited for supplying three packets of drug free of charge to her son.

According to her, the three packets could last for a year.

The Hydroxyurea Capsules is a brand of global pharmaceutical giant, Novartis which is partnering Zipline Ghana Limited and the Sickle Cell Foundation to ensure sickle cell drugs reach the doorsteps of every patient in Ghana.

Mr. Daniel Marfo, on his part, stressed that his outfit was working with Novartis and the Sickle Cell Foundation to find ways of easing the plight of Kwaku and other sickle cell patients in the Eastern Region and indeed across the country.

“Today, the boy and his mother do not have to travel to Korle Bu; they can just pick a car and go to Asamankese,” he said.

President of the Sickle Cell Foundation of Ghana, Professor Kwaku Ohene Frimpong, praised Novartis for the numerous supports it has rendered to the Foundation and Sickle Cell patients in Ghana over the years.

He disclosed that since 1995, Novartis has been supporting the treatment of sickle cell in Ghana, revealing that the Swiss pharmaceutical giant has pledged to half the price of the Hydroxyurea Capsules.