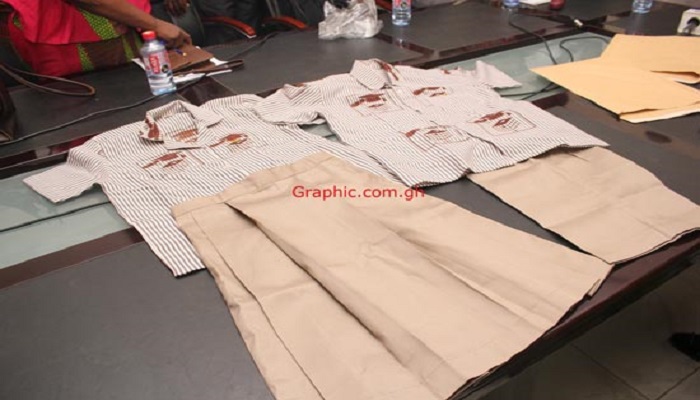 Beginning from the 2019/2020 academic year, all junior high school students will be required to use newly introduced school uniforms.

The features of the new uniforms are the Ghana Flag, a certificate, a graduation cap and books.

Displaying the new uniforms at a press briefing in Accra yesterday, the Director-General of the Ghana Education Service (GES), Prof. Kwasi Opoku-Amankwa, explained that the new school uniforms formed part of the educational reforms being embarked on by the government.

Asked about the cost implications of the new uniforms, he said just as was the case with the current school uniforms, for which parents bore the cost, the same would be applicable for the new school uniform.

“For the uniforms, what happens is that from the KG to JHS, as we all know, parents buy them and not the government. However, we have some deprived areas where the government has decided to buy the uniforms for them. So over the years we buy for those areas and this has been going on for a couple of years now. As far as we are concerned, that has not changed,” he explained.

Giving a background to the introduction of the new school uniform, he said the sector Minister, Dr Matthew Opoku Prempeh, through consultations, presented a memo to the Cabinet, “which was duly accepted for us to change the junior high school uniform from the next academic year”.

“The idea is for them to start seeing themselves as secondary school students. They are in lower secondary school,” he explained, citing international standards as justification.

He explained that in other parts of the world, from junior secondary, the student exited straight into senior secondary school, “but in our case, the structure is such that they are part of the primary school and so they tend to see themselves as primary school students”.

“The idea is to psychologically let them see themselves as secondary school students and this also dovetails into the new reforms that are coming in terms of the content of their curriculum, which will be upgraded such that it will come to the standard of a normal secondary school system,” Prof. Opoku-Amankwa said.

On examination/printing fees in basic schools, he said the management had been involved in consultations with the major stakeholders, including head teachers, through the Conference of Heads of Basic Schools (COHBS) and the Conference of Directors of Education (CODE) to look at various options.

“The management of the GES wishes to assure all head teachers, teachers, parents, students/pupils that by the time of next term examinations, all these issues, where some teachers are seen writing examination questions on blackboards and in some cases on the floor and ceilings, would have been resolved,” Prof. Opoku-Amankwa explained.

He reiterated the management’s commitment to the implementation of the free, compulsory, universal basic education (FCUBE) policy as provided for under the 1992 Constitution.

On financial provision for education, he said for the first time in the history of the service, budgetary provision and releases had been made to circuits to ensure improved supervision of schools to improve learning outcomes.