Jesus Is The Only Deliverer And Hope Of The World – Apostle Prof. Opoku Onyinah

Home - News - Jesus Is The Only Deliverer And Hope Of The World – Apostle Prof. Opoku Onyinah 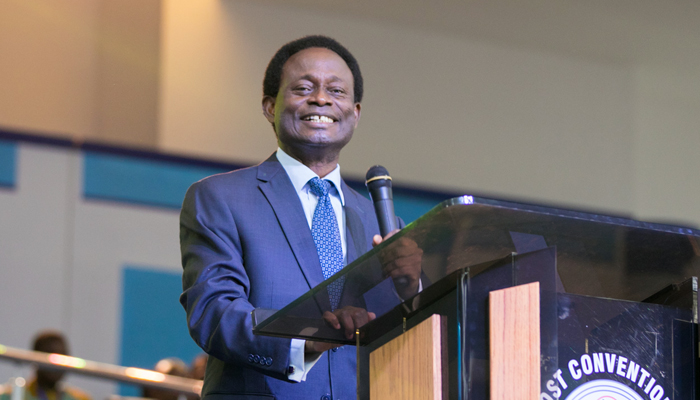 Jesus Is The Only Deliverer And Hope Of The World – Apostle Prof. Opoku Onyinah

The immediate past Chairman of The Church of Pentecost, Apostle Prof. Opoku Onyinah, has advised people of the world to turn to Jesus Christ and live, because Jesus is the only deliverer and hope of the world today.

According to him, just as God instructed Moses to lift the blazing serpent on the pole on the desert for the Israelites to look at it and survive in the wake of the poisonous snakebite epidemic, anyone who confesses their wrongdoings and turn to Jesus in these trying moments of the world would be saved.

Apostle Prof. Opoku Onyinah, a former President of the Ghana Pentecostal and Charismatic Council (GPCC), said this in a telecast sermon he delivered on Sunday, March 22, 2020, on PENT TV and Facebook Live.

The outbreak of the COVID-19 pandemic has led to a ban on all church services and other social gatherings for the next four weeks. The leadership of the church has directed that ministers and local assemblies take advantage of the media to reach out to the members and engage them in fellowship and prayer. Again, the churches have been advised to make use of cell meetings and family devotions to keep their spiritual sanctity intact during the ban.

He, however, said most of the problems and challenges facing humanity today are man-made since human beings are not learning from the mistakes of the past.

The revered theologian said that when the Israelites were getting closer to the Promised Land, they came face-to-face with Edom, a city whose people were descendants of Esau, a brother of Israel (Jacob). Moses sent emissaries to the King of Edom to plead to allow the people to pass through their land to the Promised Land, however, the king declined. This, he explained, compelled the Israelites to take a longer route at the borders causing them to grumble and talk against Moses and God.

He said it was at this point that God had to release poisonous snakes to devour the people. However, when they realised their wrongdoings and cried out to God through Moses, God instructed Moses to make a fiery snake and put it on the pole so that those who would obey and look at it would live.

Drawing some lessons from the passage, the former Chairman said the King of Edom refused to allow his own brothers to pass through his land because of mistrust. He explained that nations have armed their armies to the teeth with all kinds of deadly weapons because of mistrust.

He cited the spate at which water bodies are being destroyed in Ghana due to illegal mining and the carnages on the road which, he noted, was even killing more people than the Coronavirus pandemic.

He also indicated that when the people of Israel repented of their sins and turned to God, He listened to their cry and provided a solution. He, therefore, advised people of this generation not to repeat the mistakes of the past but to be obedient to God and save their souls from disasters. “The Lord loves you and wants the best for you. He doesn’t want to destroy you; He wants you to prosper and enjoy long and a good life, only be obedient to His word,” he said.

Apostle Prof. Opoku Onyinah noted that God continues to forgive humanity despite the many abominable things people commit against Him. “But when it comes to a certain point, He sometimes allows some of nature’s disasters to come so that at least we will know that there is a Creator,” he pointed out.

The former Chairman explained that God took advantage of the spectacle on the desert to give humanity a good picture of what the Lord Jesus Christ was coming to do on earth.

Just as Moses instructed the people to look at the fiery snake and live, Apostle Prof. Opoku Onyinah advised Ghanaians to obey and observe safety measures such as the social distancing protocols, regular hand washing, the use of hand sanitisers, among others, that have been announced by the government, health officials and the leadership of the church so that they would stay safe from contracting the deadly Coronavirus disease.

“These measures are supposed to help us avoid being infected. Take them seriously to strengthen your home and family life. Strengthen your devotional life, because there is no big gathering elsewhere where people will go and demonstrate their healing prowess.

“Read your Bible daily, read good Christian books that will strengthen you. As you fast, pray, read the Bible and organise family devotions at home, in so doing, you will be strengthened and you will get to know God from a different perspective,” he said.