Jesus Has Restored The Dignity Of The Human Race – General Secretary 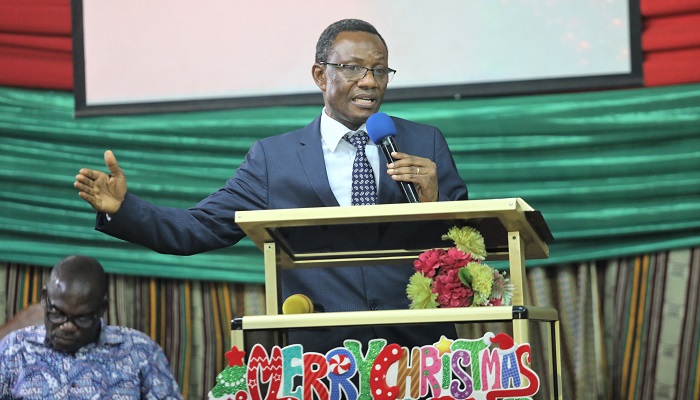 Jesus Has Restored The Dignity Of The Human Race – General Secretary

The General Secretary of The Church of Pentecost, Apostle Alexander Nana Yaw Kumi-Larbi, has said that Jesus Christ came to the world to restore the glory of God that humanity lost through disobedience.

Apostle Kumi-Larbi said this on Friday, December 27, 2019, when he joined members of the Danquah Worship Centre in La Area for the ongoing Christmas Convention.

Speaking on the topic: “Celebrating Christmas The Right Way”, which he based on the Angelic Carol sang in Luke 2:9-14, Apostle Kumi-Larbi defined glory as the honour, splendour and respect that is accorded to any individual that causes them to be appreciated by all.

He explained that when God created humankind, He clothed them with His glory and that distinguishes them from other living creatures on earth. However, after the fall of mankind, humanity lost that privileged position and became ordinary beings.

“Without the glory of God, human beings were reduced to animals,” he said.

Reading from Romans 3:23, he said that because of the depraved state of humanity, human beings have fallen short of the glory of God and therefore indulge in all kinds of evil practices such as homosexuality (same-sex), bestiality (sex with animals) etc.

Recounting the story of Daniel in the Lions’ den in Daniel 6 to further buttress this point, the General Secretary explained that when Daniel was put into the den, the lions could not attack him because he was clothed with the glory of God. This, according to him, is the glory that enveloped Adam and Eve in the Garden of Eden and enabled them to coexist with other wild animals.

“The lions could not attack Daniel because the glory of God was upon him. So, the wild animals no longer saw him as mere meat but accorded him respect as one who gave them names in the Garden,” he noted.

He, however, noted that the others who were later dropped into the den were viciously attacked by the lions because they did not possess the glory of God.

Apostle Kumi-Larbi said that Jesus Christ was, therefore, sent to the earth to restore the glory of God to humanity.

He said that, through the birth, death and resurrection of Jesus Christ, the dignity of humanity has been restored.

He further noted that anyone who accepts Jesus Christ as Lord and Saviour receives the glory of God that he or she lost and is able to lead a righteous life.

“Salvation is not just about good works. So, it is not enough to do good to be saved, one must first be recreated (born again) before he or she would be enabled to lead a righteous life. This is because, without Christ, our righteousness is like filthy rags before the Lord,” he said.

He also cautioned believers to always be mindful of the fact that they have been recreated unto good works, hence, they should endeavour to live exemplary lifestyles that would portray the glory of God to all people.

Apostle Alexander Nana Yaw Kumi-Larbi also encouraged Christians to live peaceably with others in society by being tolerant of others, forgiving quickly, being humble, respecting all people, being selfless, not being vengeful and doing nothing out of vain conceit, but regarding others highly above themselves in all situations so that the peace of God would reign on earth.

“Because of us (Christians), there must be peace on earth,” he charged.