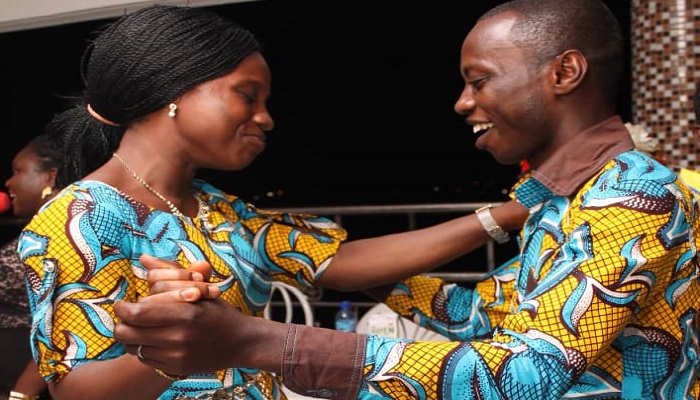 The Israel District of Kaneshie Area of The Church of Pentecost has organised its maiden couples’ dinner dubbed “And The Two Shall Be One” (Matthew 19:6.) for married couples in the District.

The programme, which was held on Sunday, April 14, 2019, at the Attram Sports Complex, was organised by the leadership of the District to “spice up marriages, prune marriages and nurture the flowers that grow in the marriage garden of couples.”

The dinner was well attended by couples in the District with their customized same-outfits glittering like diamonds. One could not be bored but be excited as couples took turns to spoon-feed each other. Other activities for the night includes “carry your husband or wife” competition, and dancing competition. Couples who excelled were handsomely rewarded.

Speaking at the event on the topic “The Bible and Sex in Marriage,” Mrs. Beatrice Kwaffo, a former Women’s Ministry Director of The Church of Pentecost, bemoaned the change in behaviour of many couples right after the marriage ceremony. According to her, most couples do not communicate and this usually affects their “bedmatics” (sexual) roles.

“Some couples do not even communicate their feelings in bed to their partners when it matters most but rather turn to flirt outside their matrimonial home,” she stated.

She ended by stating that the institution of marriage means a lot to God, hence, couples should endeavour to make the home a happier and a better place.

She, therefore, advised couples to appreciate their partners, pamper each other, learn to satisfy each other, learn to maintain companionship, learn to complement each other with words, never disrespect each other both publicly or privately, be open to each other, stop comparing their marriages to other marriages, and have quality time together in spite of having heavy and busy schedules. This she said will go a long way to build and maintain strong healthy families.

Report by: Deacon Augustine A. Ampadu