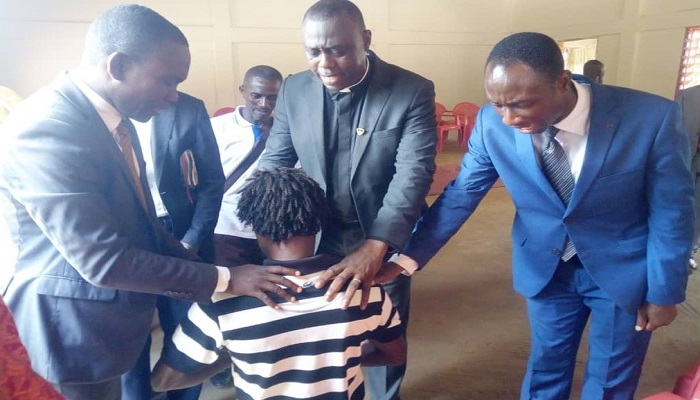 Sule Habuga, a Beninese who has lived his entire life as a fetish priest for about 40 years, has been arrested by the power of the Holy Spirit after a failed attempt to ‘kill’ the Sefwi-Wiawso Area Head of The Church of Pentecost, Apostle John Obeng Kesse.

The incident happened during a dedication service of the Graceland Assembly church building in Ackaakrom District of the Sefwi-Wiawso Area on December 19, 2019, which was officiated by the Area Head, Apostle John Obeng Kesse.

Sule Habuga, who has now given his life to Jesus Christ, confessed that he purposely went to the church service to challenge Apostle J. O. Kesse. According to him, he spiritually shot the Area Head three times and threw other spiritual weapons at him but could not hit his target.

After unsuccessful attempts, the popular fetish priest decided to run away from the auditorium but could not escape due to the presence of the Holy Spirit. He indicated that he was trapped by fire at the gates which, he said, was also around the entire church building.

The Area Head who had had an intuition about the whole development made an altar call in the middle of the service. However, nobody responded to the call. According to reports, the Area Head specifically walked to this unknown person (Sule Habuga) who was in “Rasta hairdo” and told him to give his life to Christ. Realising that he has been overpowered by the Holy Spirit, Sule knelt down to accept Christ and was prayed for. During the prayers, the evil spirits began to manifest violently but with the help of some pastors and elders, he was overpowered and fell to the ground powerlessly.

He later vomited a copper ring he had swallowed when he was given water to drink. He was baptised shortly after the prayers and after coming out of the water, Sule had a supernatural encounter of seeing the heavens opened to him and saw many people in shiny clothes moving about.

He then gave out his idols and amulets to be burnt by Overseer Robert Dwumah, the District Minister of Ackaakrom District, and some elders. He has since been baptised in the Holy Spirit and fellowships at Graceland Assembly.

Sule now shares his newfound faith in Christ and the peace that he is enjoying. He stated: “Now I don’t walk in fear any longer.”