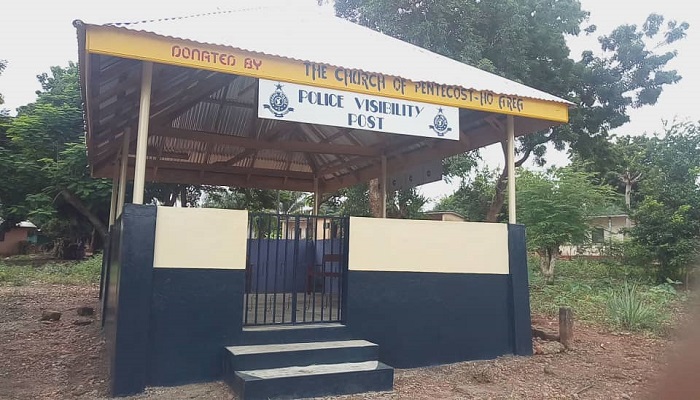 The Ho Area of The Church of Pentecost has constructed a Police Visibility Post worth GHS12, 000.00 at Ho Mawuli Estate to beef up security in the community. The Church has also renovated a washroom facility at the cost of GHS3,250.00 for personnel at the station.

The gesture formed part of the Church’s social intervention programme under the Vision 2023 agenda of “Possessing the Nations.”

Speaking at the handing over ceremony held on July 31, 2019, the Ho Area Head, Apostle Moses Kwame Ahiakor, said the Church deemed it necessary to put up the structures to enhance the visibility of police personnel in the area.

He said the Church has undertaken various community and social intervention projects such as the construction of hospitals, schools, police stations, prison facilities, and bus stops across the nation to complement the effort of government in developing the country.

“Until the construction of this structure, the Police personnel at post only sit under trees and canopies which at times breakdown due to heavy downpour rendering the personnel stranded. This situation makes the visibility of the police difficult since they have no option than to close for the day, thereby attracting criminals to the area.

“This really put the security of the resident at risk as many of them were attacked by these criminals. Looking at this, the Church decided to put up the visibility post to enhance security in this community.

“I, therefore, call on all and sundry to support the Ghana Police Service since the government cannot do it alone,” Apostle Ahiakor said.

In a speech, the Volta Regional Police Commander, Deputy Commissioner of Police (DCOP) Edward Oduro Kwarteng, who was full of appreciation to the Church over the gesture, said the facility was going to help improve the visibility of the Police in the area.

According to DCOP Oduro Kwarteng, The Church of Pentecost over the years has supported the Ghana Police Service with the provision of infrastructure and logistics.

“I can vividly recollect the GHS5.2m Divisional Police Headquarters at Kasoa Millennium City built by the Church and commissioned by the Vice President, Dr Mahamudu Bawumia, on May 3, 2018,” he stated.

The Regional Police Commander said policing is a collective or shared responsibility between the state, its citizens and corporate organisations.

“The government alone cannot provide the needs of the Police Service to enable it to achieve its vision of becoming a world-class Police Service capable of delivering planned, democratic, protective and peaceful services up to standards of international best practice without the support of citizens and corporate organisations,” he emphasized.

He urged other faith-based organisations to emulate what The Church of Pentecost has done and come to the aid of the police.