Have Confidence In The Law Of The Lord – Chairman Urges Christians 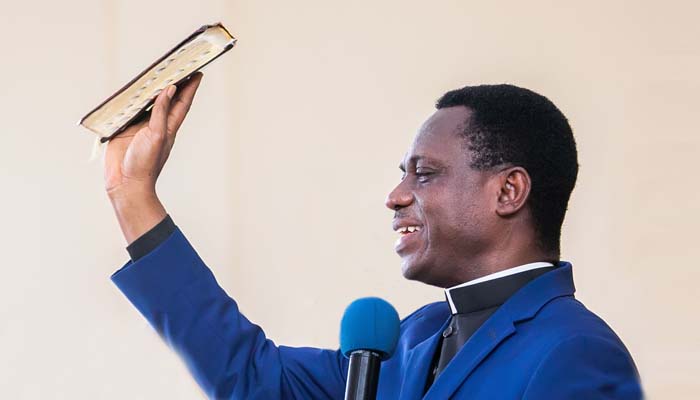 Have Confidence In The Law Of The Lord – Chairman Urges Christians

The Chairman of The Church of Pentecost, Apostle Eric Nyamekye, has asked Christians to have great confidence in the law of the spirit of life in Christ Jesus by which they have been made free from the bondage of sin.

According to him, Christians can live victoriously and walk on earth like Jesus did only when they realise that the law of the Lord is perfect and rewarding when it is kept and trusted.

Apostle Nyamekye said this in a live televised sermon on PENT TV during a Special Evening Service on Sunday, May 3, 2020, as part of his series on “Living A Victorious Christian Life.”

According to him, victorious Christian life begins at where Jesus left off. He further explained that the law of the Spirit of life in Christ Jesus which was passed on the cross has set believers free from the law or the power of sin and death. He, therefore, charged Christians to wholly put their trust in it.

Using an analogy of the slavery which gave the slave master the power to take someone as a slave, which was abolished by Abraham Lincoln to back his message, Apostle Nyamekye was emphatic that the power of sin which caused mankind to be slaves to the devil was completely dealt with by Jesus Christ on the cross.

“The power of sin over us which hooked us to the devil’s yoke was effectively destroyed by the anointing. The Bible says by the anointing the yoke is broken,” he stressed.

He, however, said that though the slave is free, he might still be kept on the master’s plantation because of his ignorance of the abolition of slavery and his unwillingness to move away from the master.

Dwelling on the unwillingness of the slave to leave the plantation which was the focal point of his sermon, the Chairman opined that being fully aware of the abolition of slavery, the slave might not leave the plantation because of sense of insecurity. This, he explained, the slave becomes skeptical about the provisions of the new law which has set him free if he leaves the master.

Apostle Nyamekye explained that just like the slave, some Christians are unwilling to break free from the devil because of a sense of insecurity, thinking that the law of the Lord which has liberated them is not able to hold them and grant them a good future. This, he attributed to the deceptions of the devil.

Reading from 1 Samuel 16:1-2, the Chairman further indicated that insecurity coupled with the fear of people, past, future, and evil also restrain Christians from breaking free and hold on to the law of the Lord. He noted that Samuel, being a judge, priest, and prophet of the people of Israel was afraid of Saul after God Himself had spoken to him to go and anoint David as king over Israel, saying, “Samuel was not too sure whether God who has sent him would be able to deliver him from the hands of Saul.”

Apostle Nyamekye cited various Bible figures like Aaron, Sarah, Peter, among others, who out of fear did what was wrong in the sight of God and urged Christians to have confidence in the word of God and the law of the Lord because their salvation is complete and secure in the Lord, stressing that, “the law of the Lord is sure and solid; it delivers us and prospers us.”

He added that the law was passed by God Himself and as such it is supreme law which cannot be challenged or overturned since it is forever settled in heaven (Romans 7:24-25; 8:1-3).

Touching on how the law of the Lord was enacted, Apostle Nyamekye read 1 John 5:19-13 and explained how God Himself gave testimony about His Son, Jesus Christ, as being the only source of salvation and eternal life for mankind. He stressed that, “eternal life is found only in Jesus Christ because there is salvation in no one else, for there is no other name under heaven given among men by which we must be saved.”

Since God wanted to make the salvation and the eternal life in His Son very clear so that no generation is confused, Apostle Nyamekye further explained that He (God) confirmed the testimony with an oath (Hebrews 6:13-19), saying, “oath confirms what is said and puts an end to all arguments.”

Also, reading from Philippians 2:5-11 and Hebrews 1:4, the Chairman established that Jesus, being the only Saviour of the world is premised on the fact that He is highly exalted and made superior to all by God.

He added: “Jesus’ name is superior to all other names and at the mention of His name every knee bows and every tongue confesses the Lordship of Christ to the glory of God. Bible says whosoever shall call upon that name shall be saved. If it is not about Christ you cannot be saved. This is the word of God and this is what we call the Gospel.”

He further noted that the Gospel is salvation in the Lord Jesus Christ and whoever tries to pervert the Gospel and turn the verdict of God is eternally condemned (Galatians 1:6-9; Deuteronomy 17:8-12).

He, therefore, encouraged Christians to act upon the law of the Lord forcefully regardless of what the devil may do because the law which has been passed in their favour renews the soul and it is a package for them (Psalm 19:7-11).

“Salvation is a package; when we are born again we receive eternal life; life in abundance. Our future is in the salvation that we have received; our prosperity is in the law so act upon it. Don’t start crying, once the law is on your side, act upon it forcefully.

“People talk about the ancestral curses; it doesn’t matter because the devil was not destroyed; he was not killed so he is going to destroy you but enforce the law.

“He will test you whether you understand the law or not. But in the law, the devil is under your feet. It is not about the forces in your family; it is your ability to enforce the law and signs and wonders will follow you.

“Be willing to follow and trust in the law of the Lord. Once you are born again don’t be afraid of people, evil, and the future but religiously follow the law of the Lord and seek to please Him. Be a victorious Christian and let us build a glorious Church,” Apostle Eric Nyamekye concluded.